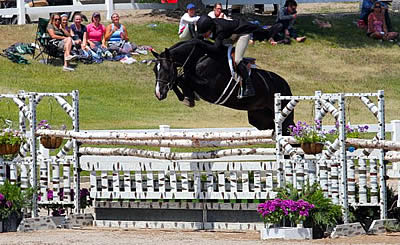 Parker, CO – July 8, 2014 – Colorado Horse Park got underway with Week V of Summer in the Rockies, their biggest ever with a Derby Day. Spectators crowded around the Derby Field to watch the feature events of the day, the $40,000 USHJA International Hunter Derby sponsored by Serenity Farm and the $10,000 USHJA National Hunter Derby. Derby horses from far and wide travelled to Colorado to compete. Some of the country’s finest derby horses showed off their beauty, impeccable jumping form and flowing style in today’s events.

Jasen Shelley of Wellington, FL designed the beautiful courses in the Derby Field.

“I think both the National and the International Derbies rode really well,” said Shelley. “Everyone seemed to have fun and that’s what it’s all about. Juan Diaz is the person to take all the credit for the decorating. He did an amazing job. Pat (Boyle) helped me with the track and we came up with what we thought was a really good track for the competitors.”

The Derby Field at the Colorado Horse Park is an immense arena with footing and interesting banks, ramps and hills. Riders had the option of going down a ramp to a trot jump or go down a two-step bank to the trot jump. Shelley said he didn’t want the riders to be forced to take the bank option if they finished the birch oxer on the hill strongly.

“The hills shaped the way the course rode; we wanted to give them five to six strides at the bottom of the hill before they even had to think about jumping. It was really fun with the hills.”

Twenty-eight derby horses competed in the first classic hunter round then the top 12 scoring horse and rider teams returned for the handy round. Kelley Farmer of Lane Change Farm in Keswick, VA had three mounts that made the cut: Mindful, Point Being, and Unspoken, all owned by Glefke and Kensel, LLC. In addition, Farmer piloted Unspoken who to the top placing and the blue ribbon by earning 185 from the judges in the first round and 192 in the handy. The two judges’ panels awarded extra points for the higher options and one panel awarded a handy score of 9 for a total of 377 points for both rounds.

“She was wonderful last week in Chicago and she was amazing here,” Glefke said. “I got her from McLain Ward and she was jumping 1.25m-1.30m all last year in Florida and she’s just starting to become a real derby contender now. I’m thrilled with the way she is coming up to the derby finals, which is real cool. They got a lot of experience today for the finals.”

“We are thrilled to be here,” he continued. “This is a beautiful facility and Pat (Boyle) runs amazing horse shows. I follow Pat around to a lot of horse shows because he always makes it very believable.”

Farmer expressed her thoughts on Derby Field ring and the course.

“What a nice change to have hills with footing so beautifully built,” said Farmer who also placed third with Point Being. “It’s great; the ring – it is huge and you get to jump the bank and go up and down the hills – I think it is great!

Leslie Steele from Calabasas, CA and her Acres West Farm returned with Apandanto, owned by 4232 Enterprises. The pair was brilliant, earning option bonus points and a total of 373.5.

“He was imported into the United States by Ali Nilforushan and he’s been a jumper,” said Steele about Apandanto. “Ali asked me to press on with him so I brought him here and I showed him in the high performance. I said, ‘Okay, you’re going to be a derby horse!’ I’m lucky. He’s a great horse.”

Steele was also complimentary of the courses.

“I thought the courses were fantastic,” she said. They were beautiful, fun galloping flowing. I really love it here it has really been a lot of fun. The handy – you could be as handy as you want to be all the options were big and I like that.”

Steele planned to move up with Apandanto and she said that because he has some jumper experience, he can jump really big jumps.

“He knows how to turn inside and go,” she said. “So I chose all the hardest options I possibly could and he handled them really well.”

Two top junior riders impressed the judges in the first round, earning them a spot in the handy round. Hunter Holloway and Hays Investment Corporation’s Lyons Creek Bellini earned the fourth place prize and Kirklen Peterson and Pen Name, also owned by Glefke and Kensel, LLC, were eighth.

The $40,000 USHJA International Hunter Derby was sponsored by Serenity Farm, recognized as one of the top hunter and equitation centers in the country and is nationally recognized for its reputation of producing champions consistently on the local, regional and national circuits.

“The courses were wonderful and the USHJA would be very pleased with the high standard that Pat (Boyle) accomplished here today,” said Cindy Cruciotti, head trainer at Serenity Farm.

A huge field of 44 negotiated Shelley’s $10,000 USHJA course in the Derby Field. Twelve of the best performers returned for a handy round. Leoncito, owned by Lucy Hunsaker and ridden by Meredith Houx Remiger from Sandia Farm in Albuquerque, NM, won the blue ribbon and the victory gallop. Remiger accurately negotiated the course earning a 93 in the first round and an 86 in the second with 4 bonus high option points for a total of 183. In close second was Paul Rohrbach and Nancy Moore’s Morocco with a total score of 181.

“It was a great course,” said Remiger. “I just rode the best that would show off my horse the way he jumps. He went around and had a blast doing it.”

“Toby” has been with Remiger for the last three or four years. She started him in 3’3″ and moved him up to the 3’6′. Remiger thanks Hunsaker, who has had him since he was an unbroken 3-year-old, for letting her ride him.

“I am very lucky,” said Remiger “He loves the derby. He is a wonderful, happy, laid back horse.”

Earlier in the day the $2500 Pony Hunter Derby (Small, Medium and Large) and the $2500 Children’s/Adult Hunter Derby were held in the Olson Family Main Hunter Ring.

Cinderella, owned and ridden by Sarah Bigbee, was awarded the top prize in the $2500 Children’s/Adult Hunter Derby. Brooke Brombach and her own Nantucket earned first place honors in the $2500 Pony Hunter Derby.

“We were a little bit better; we didn’t have as many big chips,” said Brombach about her improvements over her first round. “He loves doing the rollbacks, all the bendings – everything about it was fun. His barn name is Tucker; he is a spoiled little boy. He is 18 years old. He is always begging for cookies. He is a really good pony. I love doing the pony derbies; they are awesome.”