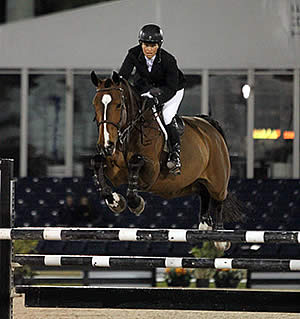 It came down to a ride-off between Lillie Keenan and Beezie Madden on February 20th, but the seven teams of grand prix riders were not just jumping against the clock in the EQUUS Foundation’s first Best Performance Team Invitational. The top ranked riders were being judged by legends George H. Morris and Katie Prudent on their style under the lights in the International Arena at the Palm Beach International Equestrian Center in Wellington, Florida.

“It was a lot of fun, and it’s nice to be able to participate in a class that gives back to the horses that do so much for us,” Keenan explained. “The EQUUS Foundation is a great organization not only for the horses but also for how horses can help people. We all do this sport because we love the horse.” Madden added, “We all just love to do something to benefit such a great organization like the EQUUS Foundation. It was a great night for us to have a little fun.”

Each rider was awarded a score out of 100 from the judges, and the lowest score from each team was dropped. At the end of the first round, Beezie Madden rose to the top as the individual front-runner, claiming the title of Best Individual Performance with a score of 99.

While Madden was the clear individual winner, the team competition came down to the wire and a showdown between the Ariat/Animal Planet team, composed of Madden, Georgina Bloomberg and Nicole Shahanian-Simpson, and the CallariCars.com team of Rodrigo Pessoa, Lillie Keenan and Ali Wolff.

Sitting tied with each other, each team elected one representative to return for a ride-off, with Madden coming forward for team Ariat/Animal Planet and Keenan stepping up to the plate for team CallariCars.com. With a rail down, Madden’s score of 90 fell short to Keenan’s score of 96, clinching the first Best Performance Team title for the CallariCars.com team.

The climatic ride-off marked the successful end to an evening that celebrated the positive impact that horses have in our lives. Lynn Coakley, EQUUS Foundation President, spoke briefly and introduced the new EQUUS Foundation video produced by the Infamous Productions team of James Wooster and Brian Lookabill, who served as Emcee.

Jenny Belknap Kees, EQUUS Foundation Chairman, and Chrystine Tauber, USEF President, announced the ten new inductees into the Horse Stars Hall of Fame and honored the owners who were able to attend.

Guests attending the EQUUS Foundation’s Fete Cheval Etoile were the first to applaud the amazing horses when the stories of their athletic and humanitarian feats were revealed at the event and on the Horse Stars Hall of Fame website.

The EQUUS Foundation partnered with the United States Equestrian Foundation (USEF) in 2013 to establish the Horse Stars Hall of Fame to honor the extraordinary talent of horses and the bond between horses and people.

Hosted annually by the EQUUS Foundation, the Fete Cheval Etoile helps raise funds to support equine charities that are improving the lives of horses, promoting the use of horses to enrich lives and educating the public about the horse’s unique abilities to empower, teach and heal.

The EQUUS Foundation, a 501(c)(3) public charity established in 2002, also known as Horse Charities of America, is dedicated to improving the quality of life of horses, enabling the therapeutic use of horses for those in need, fostering the horse-human bond, and educating the public about the horse’s unique ability to empower, teach and heal. Donations are tax-deductible to the full extent of the law. Contact the EQUUS Foundation, Inc., at 168 Long Lots Road, Westport, CT 06880, Tele: (203) 259-1550, E-Mail: equus@equusfoundation.org, Website: www.equusfoundation.org.