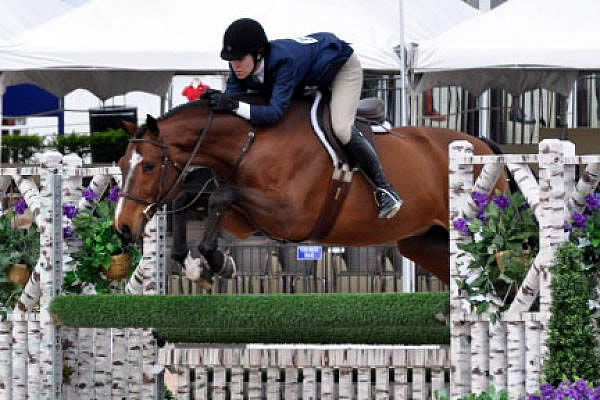 East Aurora, NY and Wellington, FL – February 25, 2013 – Katie Robinson of Deeridge Farms and Rock Steady were at the top of the leader board during World Champion Hunter Rider Week at the Wellington Equestrian Festival. The pair dominated the Amateur-Owner 35 & Over Hunters, clinching the championship honors, the High Score Amateur Award, and the opportunity to compete during the WCHR Palm Beach Hunter Spectacular under the lights in the International Ring.

Robinson posted the third score in the 90s for the week in the International Ring during the Amateur-Owner 35 & Over Hunters on Friday. Aboard Rock Steady, Robinson had a brilliant handy round, with an average score of 91. Robinson and ‘Rocky’ also had a wonderful first round, earning a second place ribbon. “We have a great relationship and I know him really well,” remarked Robinson. “He loves the handy classes and I do too, so it was really fun. I love this ring; it’s a lot of fun.”

Robinson and the 13-year-old Warmblood have a great relationship and are a team to be reckoned with. “I love riding him at the farm as much as at the horse shows, so trail rides are fun.”

The Amateur-Owners concluded on Saturday in the E. R. Mische Grand Hunter Ring, where Robinson and Rock Steady earned the championship in the Amateur-Owner 35 & Over Hunters. In addition to their placings on Friday, a second place ribbon in the stake class and the third place in the under saddle helped them claim the tricolor award.

“Rock Steady was super; he was really great in the International and he was ready to come and play in the other ring,” said Robinson. “WCHR week really is a special week. It’s so nice to be showcased and to get out in the big ring and to feel special. It makes you feel good, and it’s so much fun.”

Later that night, Robinson and Rock Steady earned the opportunity to compete WCHR Palm Beach Hunter Spectacular. They were honored with the High Score Amateur Award for their score of 91 in Friday’s handy class.

Robinson and Deeridge Farms will continue to compete throughout the 12 weeks of the 2013 Winter Equestrian Festival at the Palm Beach International Equestrian Center in Wellington, FL.