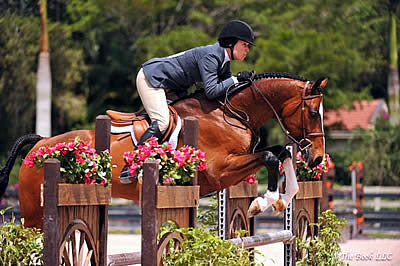 East Aurora, NY and Wellington, FL – April 5, 2016 – The Winter Equestrian Festival (WEF) drew to a close this past Sunday, and riders are already prepping for the spring and summer show seasons. Katie Jacobs-Robinson of Deeridge Farms dominated the Amateur-Owner 35 and Over 3’3″ Hunter division throughout the season with her two mounts, Cascarillo and Sutton Place. Robinson and her horses finished strong with multiple tricolor awards during the final weeks of the circuit for their efforts.

Despite being busy with her children and taking her son to look at colleges, Robinson still managed to find time to horse show. During the final week of WEF, Robinson closed out the Amateur-Owner 35 and Over 3’3″ Hunters with top results on her newest mount Cascarillo. Robinson had excellent rounds, setting herself a part from the rest of the class, earning the pair the division championship.

“Brady Mitchell and Chris Sorensen imported Cascarillo over the summer, and just really took our time getting to know him,” explained Robinson. “I showed him before circuit started and then we finished up great! He’s just a lot of fun to ride; he’s just a really fun horse.”

She continued, “I have to make sure I’m galloping along because he doesn’t always think that there’s going to be another jump; he’s still sort of green in that respect. It’s just making sure I maintain his attention and I keep on cantering forward. These past few weeks everything has come up beautifully.”

“Sutton Place has really grown up,” Robinson said of Sutton Place. “He really knows the drill now. He’s such a big horse; he’s got a huge stride, and a really big jump, so my focus is always staying with him.”

Robinson and her family also successfully hosted the inaugural Wellington Masters World Cup competition in February of 2016. “It was so much fun,” she said. “I really loved it, and it was great for me to be able to do something like that with my brothers and my parents. I think it was really interesting to think about it as a competitor and what I would want and what I think is important to not only the exhibitors and the owners and riders, but also to working in the stable; it came full circle and I enjoyed it a lot.”

Cascarillo and Sutton Place will now return to Heritage Farm in Katonah, New York for a well-deserved break. The next stop for Robinson and her family’s Deeridge Farms will be the Old Salem Spring Horse Shows in May, followed by the Lake Placid Horse Shows later this summer.