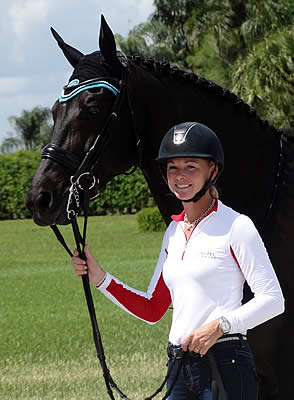 Wellington, FL (December 1, 2016) — With the winter dressage show season fast approaching in south Florida and the World Equestrian Games scheduled to be held on the United States east coast less than two years from now, top U.S. dressage riders are filled with anticipation. Horse Radio Network’s talk show Horses in the Morning invited one of these riders, Grand Prix competitor Katherine Bateson-Chandler, to the broadcast’s “Omega Alpha Equine Monday Edition” to give the inside scoop on what it’s like to prepare for the show ring as the gaze of international dressage turns to the U.S.

An online podcast of Bateson-Chandler’s interview is now available on Horses in the Morning’s website, in which Bateson-Chandler shares her thoughts on planning for the World Equestrian Games (WEG), the upcoming Winter Equestrian Festival in Wellington, Florida, her bond with her superstar mount Alcazar, and the invaluable boost she gains from training with British Olympian Carl Hester.

The road to the 2018 FEI World Equestrian Games (WEG) will offer triumphs and inevitable challenges for standout horse-and-rider pairs who hope to compete in the Tryon, North Carolina event. Bateson-Chandler is already working hard to prepare for the WEG – one of the biggest events on the global sporting calendar – and spent this past summer competing in Europe and training with Carl Hester.

The radio show was quick to get right to the question on most riders’ minds – one that Bateson-Chandler was happy to answer – which was whether or not she has actually ridden Valegro while at Hester’s facility. “I have!” she said. “Carl and Charlotte Dujardin both are very open with their horses, so pretty much everybody rides everything. That’s great fun!  And Valegro truly is what he seems to be – he is the most special horse in the world, and I have been around a lot of special horses, international and otherwise. There is something about him that is so gentle. He is such an old soul.”

Despite Valegro’s allure, there is another horse that fills Bateson-Chandler’s heart. “One hundred percent I believe horses have a ‘person,’” she explained. “Alcazar is my special boy.” The Dutch-bred gelding affectionately known as “Lonzie,” owned by Jane Clark, has trained up the levels to Grand Prix with Bateson-Chandler. “When you spend every day with a horse, there is a bond you can’t describe; you have to feel it. We know each other so well. He has a lot of character and tries really hard, with enough spice that keeps every day interesting. He is back up and running after colic surgery last summer, and he feels better than ever.”

It takes years to develop the superior strength needed for international competition. Muscle development, plus the best feeding and supplement regimen, is crucial. Bateson-Chandler uses several different all-natural Omega Alpha products to keep Alcazar and her other equine partners in top shape. “Across the board, the horses like the Omega Alpha Gastra-FX. Omega Alpha’s philosophy is to create healthy horses by starting with the gut, and I totally agree. Every vet I speak to says to start with the intestines, the inside of the horse.” Bateson-Chandler’s supplement of choice for equine pain relief is Omega Alpha’s Antiflam. “Antiflam is amazing for my high performance horses working at the international level. I Iove the thought of taking inflammation out of their muscles in a completely natural way.”

As plans for the 2018 World Equestrian Games begin to form, Bateson-Chandler is first intent on the Wellington show series at hand. With her personal and professional mentor Olympian Debbie McDonald, she will choose Florida shows to compete in and will look toward next summer in Europe, as well. She will project backwards from the WEG, planning her qualifying period and where she needs to be month-by-month, season-by-season. “I always have a greater idea in mind of what I want to do, but again, you learn that things can change. If you wait until the year of the championships to plan, you are behind the eight ball. Everyone is planning now, to be honest, even towards the Tokyo Olympics. Absolutely, this is a very important season.”

To listen to her exciting interview on Horses in the Morning, go to Omega Alpha Equine Monday Edition at http://www.horsesinthemorning.com/11-14-2016-by-omega-alpha-equine-hellos-big-win-bateson-chandler-horse-nation-bucket-list/. For more information about Katherine Bateson-Chandler, visit www.kbcdressage.com.