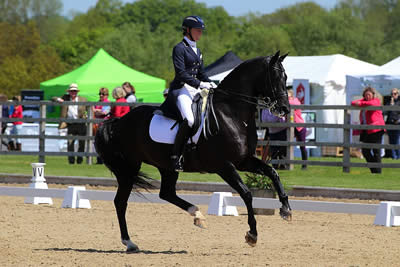 Wellington, FL (December 9, 2014) — The award that the United States Dressage Federation calls its “most prestigious honor” has been presented to a powerful, expressive KWPN gelding and his rider, Katherine Bateson-Chandler of Wellington, Florida. After a year of impressive achievements in the dressage arena, Alcazar — owned by Jane Forbes Clark — earned the Adequan/USDF Dressage Horse of the Year Year-End Award for his performances with Bateson-Chandler in the Intermediate II level.

The Adequan/USDF Year-End Awards are presented to select riders and horses that have had not only a few successful shows, but an entire year of achieving high scores in competition. The most recent Year-End Awards were given after the close of the USDF competition year, which ran from October 1, 2013 to September 30, 2014. Katherine Bateson-Chandler and Alcazar (Contango x a Ferro mare) received the prestigious Adequan/USDF Dressage Horse of the Year Award for the Intermediate II level with their year’s impressive mean score of 71.941 percent.

Internationally successful Grand Prix champion Bateson-Chandler has competed on Alcazar for the past two years, and is loving the experience. “He has the perfect temperament for a competition horse — very brave and self-confident. He has presence and is extremely trainable,” she once commented about her award-winning mount. The nine-year-old dark bay gelding and Bateson-Chandler have had numerous successes leading up to receiving this Year-End honor. Earlier this year, they earned the FEI High Point award after winning the FEI Intermediate II division at the Kentucky Dressage Association CDI in May.

Jane Forbes Clark, a long-time supporter of high-performance equestrian sports around the world, purchased Alcazar in 2012. The beautiful horse was an excellent fit for Bateson-Chandler, who has ridden and trained Clark’s horses for eight years. “I know how lucky I am and thank her every day,” Bateson-Chandler said about working with Clark. The equestrian took over the position from Robert Dover when he retired from competition, as she had worked as Dover’s groom and assistant trainer since the age of sixteen.

Bateson-Chandler spends her summers training and competing in Europe with Alcazar and her other top mounts, including Clark’s KWPN Wellnetta. In Europe, Bateson-Chandler trains with Olympic Gold Medalist Carl Hester. As many judges and spectators have done, Hester noticed something special about Bateson-Chandler and Alcazar. “Alcazar has beautiful hind legs and a great work ethic,” he once commented. Bateson-Chandler, too, is also impressed with Alcazar’s efforts and talent. She is thrilled to have had the opportunity and ability to ride him to earn the Adequan/USDF Dressage Horse of the Year Year-End Award. “You don’t get these sort of horses every day,” she said. “Maybe once in a lifetime.”

For more information about Katherine Bateson-Chandler and her star equine partners, visit www.kbcdressage.com or follow the international competitor on her Facebook page at https://www.facebook.com/pages/Katherine-Bateson-Chandler-Dressage/651928248221736?ref=hl&ref_type=bookmark.