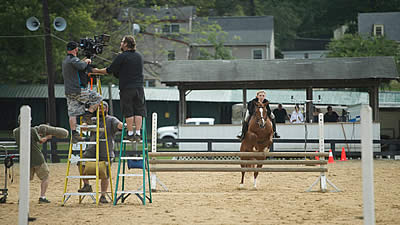 Warrenton, VA (October 11, 2018) – Lighting up the show ring has been a common occurrence for Kat Fuqua and her team of hunter horses and ponies, but the accomplished pony and junior hunter rider found her talents being used in a totally new way this September. Fuqua and Finesse RF, known around the barn as Ladybug, recently starred as the protagonist’s competition during two weekends of shooting for a live action remake of the 1930s equestrian classic, Billy and Blaze, produced by Michael Erkel. Fresh off a series additional championship finishes with Ladybug and her other mounts during the Brownland Farm Fall I & II, Fuqua hopped on an early morning flight to make it on the set of Billy and Blaze, mounting up to add a new and exciting dimension to her equestrian career.

Ladybug, the top ranked USEF Medium Hunter Pony, and Fuqua, who was recently awarded overall Grand Champion Pony Hunter at the 2018 USEF Pony Finals, switched gears from competition mode to get in character for their role. The pair plays Billy’s top competition during one of the movie’s jumping scenes, where Fuqua, playing herself, and Ladybug, playing Pickles the pony, are bested by Billy, played by Henry Lesko, and Blaze during the final round of competition.

Director Cyndi Erkel guided Fuqua and her co-stars through the ins and outs of the movie business, ensuring that they were able to play their parts without getting nervous. Associate Producer Pat Hommel selected Fuqua for the part, and as the only female rider among a cast of men, Fuqua’s excitement to be involved and to see herself and her pony on the big screen could not be overstated: “Being on the movie set was really fun and so exciting,” said Fuqua. “Ladybug was a natural and didn’t mind the cameras above her while jumping! I had so much fun and would love to do it again. I made a lot of new friends: Catherine, Hugh, Wyatt, Ivan, Chloe, Jack, and Henry! I can’t wait to see how it all turns out.”

Billy and Blaze is set to be released by independent producer Michael Erkel next year after post production and is based on the series of children’s books by C. W. Anderson. Written and set in the 1930s, the classic equestrian story is a timeless story that is still in print today and is being adapted for the screen for the first time. For more information, visit www.billyandblazemovie.com.

Before getting a dose of Hollywood, Fuqua racked up 6 Championships and two Reserve titles aboard Ladybug, Brighton, RS Levitation, a.k.a. Jett, and Prestige, a.k.a. Prince, during the Brownland Farm Fall I & II. Held in Franklin, Tennessee, a suburb of Nashville, the picturesque show grounds of Brownland Farm, owned by Sissie Brown Anderton, were a unique and beautiful backdrop for a fall horse show. Prince is a new large green pony mount for Fuqua, and the pair in their first show together took Champion week two and Reserve week one against a field of professionals in the USHJA 2’6″ Hunter division. She and Jett once again rode to victory during week one, Reserve during week two, and double wins in the Classic in the Under 15 Junior Hunters, while her USEF Pony Finals Grand Champion mount, Brighton, lit up the Large Pony division, taking both Champion and Hunter Classic Champion both weekends. Finally, her movie star mount Ladybug was awarded the Championship Medium Hunter Pony title both weekends and the Classic the second weekend, just before their career on the silver screen began.

As of October 8, the USEF ranks Kat Fuqua and her ponies as follows:

As of October 8, Fuqua is ranked as follows in the USHJA Zone 4 Hunters:

Fuqua narrowly takes second for the Leading Pony Hunter Owner, after finishing ranked #1 in 2017, while her ponies Finesse RF and Brighton are ranked Grand Pony Hunter Champion and Reserve Champion, respectively. Fuqua kicks off October with her two Junior Hunters, two large ponies, and the very special Ladybug in Harrisburg for the Pennsylvania National Horse Show followed by the Washington International Horse Show Championships. In total Fuqua qualified seven mounts, 5 ponies and two horses, with two being sold last spring, and is looking forward to seeing them there with their new riders.