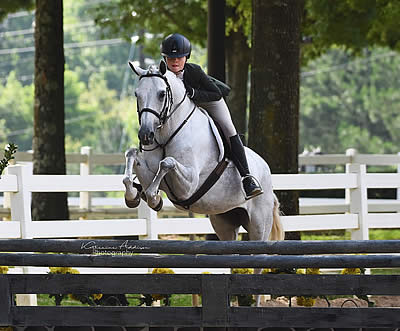 Atlanta, GA (June 28, 2018) – Kat Fuqua’s team of Champion horses and ponies got just a bit brighter this past week as the 10-year-old wrapped up two weeks of competition at the Atlanta Summer Classic I & II. Adding to her already impressive resume of hunter achievements, Fuqua topped Junior Hunters, Large, and Medium Pony Hunters in the course of the two weeks, and added two exciting new equines to her line up: Calvaro, a stunning bay Junior Hunter competitor, and Brighton, famously known as Clemens, a distinguished chestnut Large Pony mount.

After only one ride on Brighton prior to his arrival in Atlanta last week, Fuqua rode him to a Reserve Champion in the second week’s Large Pony division, and took Champion in the Hack and Model classes. “Clemens [Brighton] has a really nice canter and a big stride,” said Fuqua. “I still need to learn all of his buttons but I’m so grateful to have him. I was also thrilled to be second in the handy over fences after only one previous ride.” Trainer Michael Newman, who has guided Fuqua to much of her success over the past year, arranged the purchase for Jeff and Shereen Fuqua of Collecting Gaits Farm. “When I was approached by the Fuquas to find a pony for Kat that can compete at the highest levels, my first thought was Brighton. In my opinion he is the best large pony in the country, and I could not be more honored to have the opportunity to be a part of this talented young lady’s career. I can’t wait to see what the future holds.”

Wrapping up Team Fuqua’s string of successes was the large palomino pony Chic in Time, another winning pony of Fuqua’s that flourished under a new handler. Kat’s close friend and recent Pony Reserve Champion at Devon, Maddie Tosh, showed Chic in Time, aka Spicey, in the Large Pony Model class, taking second to Fuqua and her new Large Pony mount, Brighton.

For more information on Kat Fuqua (pronounced foo-quay), visit her website at www.KatFuqua.com.