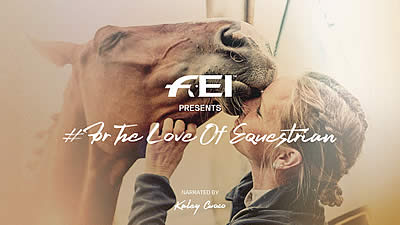 American actress and avid equestrian Kaley Cuoco is the voice of the FEI’s latest digital campaign, sharing her enthusiasm, passion, and love for the sport that has been at the core of the Olympic Movement for over a century.

#ForTheLoveOfEquestrian has launched with an exclusive heart-warming video narrated by the actress, who has been riding since she was a teenager.

“Why do we do it? Because it’s the greatest feeling in the world. Because it’s a partnership like no other. We do it for the love. The love of this life. #ForTheLoveOfEquestrian”

The campaign, scheduled to run over the summer, features incredible stories of passion, commitment, and pride from elite athletes and their teams, to everyday riders, embracing the dedication and courage that underpins equestrian sport and its surrounding lifestyle.

“We made it our priority to engage with our community and have created a new digital campaign to celebrate all the positives that make our sport unique,” FEI Commercial Director Ralph Straus said.

“We are a global sport, but we are also a way of life. Equestrian events not only provide thrilling action for fans and spectators around the world, but equestrian sport is all about the connection and, whether we can be together or not, we wanted to make sure that with the launch of this campaign, we are helping to fill the void created by the lack of live sport during this difficult time.”

With no live action currently being broadcast, the FEI is putting the sport back centre stage with an all-new, six-part series, Icons. Delving into the archives to relive some of the most exciting and heart-stopping moments from FEI Championships and Series of days gone by, Icons looks back at the careers of some of the most successful and influential equestrian athletes of recent times.

Icons, which launches Friday 29 May, puts the spotlight on those career-defining moments that make these athletes such superheroes! Watch live and free every week on FEI.TV.