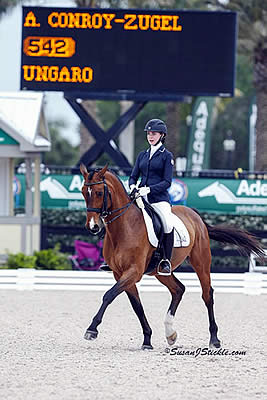 Wellington, FL – May 30, 2014 – Ashleigh Conroy-Zugel, a 16-year-old junior dressage rider, has proven she has the grit and determination to accelerate her climb in CDI competition and then rise above an injury to place back in the ribbons.

After riding dressage for only nine months, Conroy-Zugel placed first in the Junior Individual and Team tests at Centerline Events Dressage Show in Saugerties, NY, their second CDI competition, and is qualified for the 2014 U.S. Dressage Festival of Champions June 12-15 in Gladstone, NJ. After falling from her horse in November of 2013, she overcame a sidelining injury to fast-forward her rise in the juniors.

Conroy-Zugel, who lives in Holmdel, NJ and Wellington, FL, started her riding career at the age of 8, focusing on hunters and equitation. She successfully competed in 3′ hunter and equitation classes, placing at the Hampton Classic, Winter Equestrian Festival (WEF), HITS on the Hudson and the Capital Challenge.

From time to time, she would tag along with her mother, Sonia Zugel, to dressage competitions. Zugel rides as an amateur in the small tour for Ireland. Her daughter decided to give dressage a try and in 2012, Conroy-Zugel rode her hunter horse, Rolex, in Training and First Level classes, earning scores in the 70 percent range.

She was hooked. She took the plunge and transitioned completely to dressage in November of that year.

“When I started going to dressage shows, I saw how people are supportive of each other and there’s a great camaraderie,” she said. “When I switched to dressage, it was a really easy transition. In school, I strive for perfection and in dressage you are always aiming for performance and precision. That matches my personality.”

By January, she moved up to the Junior level with Rolex and her mother’s successful small tour horse, Ungaro (Weltmeyer II-M. Lady One, Wenderkreis). By the summer of 2013, she and Ungaro qualified for the NAJYRC, where she represented Region 1, helping the team to a fourth place finish.

On November 4, 2013, a cold and blustery New Jersey day, Conroy-Zugel was riding a horse the family had owned for only a few months. The horse spotted a groundhog, spooked and began rearing and bolted. The young rider was unhorsed and was unable to ride for three and half months.

Forced to watch from the sidelines, she carefully observed her mother and analyzed other junior riders at competitions, noting what she could use to improve her scores. When she was able to ride again, she used those months of studying others to her advantage.

Conroy-Zugel began riding again in late February. After only 17 days back in the saddle, she went down centerline aboard Ungaro at the Adequan Global Dressage Festival (AGDF) 10 CDI-W in mid-March and placed in the ribbons in the Junior Individual test and in the Junior Team test. They went on to compete in the final CDI3* in the AGDF series the last week in March and again earned ribbons in the largest junior classes of the season against an outstanding field.

Trained by her mother and her new trainer Ashley Perkins at the family’s farm, Conroy-Zugel is focusing on keeping Ungaro fit and supple in preparation for the Festival of Champions.

“Every day they ask me to be precise in my riding even when I’m not doing my tests,” she said of her mother and Perkins. “That way it becomes second nature. My mom and Ashley teach a lot of theory and when you know the theory, it just makes sense. I am just taking it one step at a time but hopefully, within the next few years, I can move up to Young Riders.”

Her focus on detail is noticeable in her schoolwork as well. She maintained an A average in her sophomore year at the Ranney School in Tinton Falls, NJ.

“Ashleigh feels lucky to be in a school where they are so supportive of her riding,” her mother Sonia Zugel said. “They have created a program where she has the opportunity to excel in both academics and in the equestrian world.”

Administrators at the Ranney School nominated Conroy-Zugel for leadership opportunities and she will attend a Global Leadership Conference in Europe this summer. She also volunteers as a JustWorld Ambassador and she created a pilot Junior Ambassador program for the New Jersey Chapter of The Nature Conservancy.

“I’m very proud of how quickly Ashleigh has excelled,” her mother added. “We have a lot of fun together and we can talk about the competition and prepare a strategy. It’s great to be able to share that and do it together. I’m just supporting her and giving her the ability to be the best that she can be.”

To read more about Ashleigh, Sonia and Ramanessin, go to their newly designed website, www.ramanessin.com.