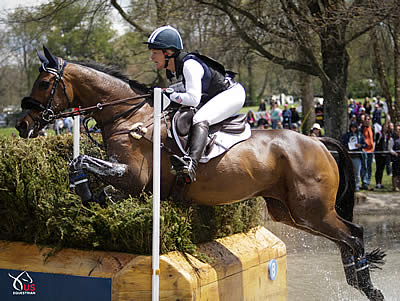 Lexington, Ky. – The conditions could not have been more perfect for a day of brilliant cross-country action, and the riders and horses did not disappoint. Defending champion Michael Jung of Germany and fisherRocana FST showed the depth of their partnership to take over the top spot after adding only 0.4 penalties to his dressage score to lead with 27.5.

Breathing down his neck is Australia’s Chris Burton and Nobilis 18 (27.9) and Oliver Townend of Great Britain on Cooley Master Class (28.7). Townend also tied for fourth aboard MHS King Joules (31.3) with Lynn Symansky and Donner (31.3). Less than a rail separates all of them as they head into the show jumping finale.

Donner is competing in his ninth CCI4* and their experience showed as he and Symansky cruised around easily. “I don’t have any complaints,” she said with a smile. “He takes a bit to get into the groove, especially with the crowd… He went around like clockwork. It’s a tribute to knowing the horse so well and having a great partnership with him. He tried his heart out, and I’m pleased with how he came home.”

Course designer di Grazia, who will design courses for the 2020 Olympics in Tokyo, was pleased with how his course rode, even though more made the time than he was expecting. “I’m generally very happy about how the course rode,” he said. “I think the faults were spread out, quite a number clean without jumping faults and I think all the combinations rode well and, at the same time, [the riders] didn’t have to do them all the same way. People did things differently and it still worked out for them. And, we didn’t have any horse falls or rider injuries, and, to me, that’s all a positive.

“I think that the ground ended up being quite fast today,” di Grazia continued. “[In part because] the conditions couldn’t be better. A little rain would have been different, but you never know. We also had a very good field of riders today. It may not have been a huge field, but the ones we had were good.”