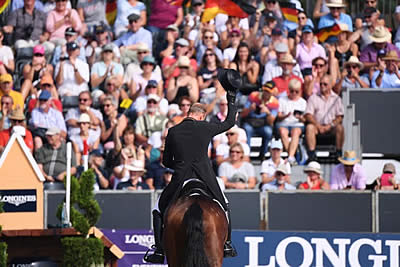 Michael Jung (GER), who has smashed pretty much every record in the sport, has just put himself in line for another – a fourth European title on a fourth horse – having taken the lead at the end of the Dressage phase at the Longines FEI European Eventing Championship in Luhmühlen (GER).

The double Olympic champion, who never gives away a mark if he can help it, has a great reputation for getting the best out of all sorts of horses. With his Luhmühlen ride fischerChipmunk FST, he has the added benefit of the 11-year-old by Contendro having been well established at top level by his former rider, Julia Krajewski (GER).

Jung’s outstanding score of 20.9 – despite a break of pace in the free walk – could not be bettered, even by defending champion Ingrid Klimke (GER), and the German team is now 16.8 penalties ahead of the 2017 winners, Great Britain, with a mere 68.9 penalties on the scoreboard.

“Chipmunk is a fantastic horse. He’s so intelligent and extremely well trained,” said Jung, who blamed himself for the mistake. “He has a lot of power and sometimes there’s a difficult balance between that and keeping him relaxed. Maybe I risked a little bit too much in the walk so he accidentally broke into trot.

“I nearly liked everything in the test today, just not really the walk – the extended walk especially!”

Klimke produced a reliably stellar performance on her regular team partner SAP Hale Bob OLD to score 22.2. Their test reflected a beautifully trained horse and a happy partnership, and Klimke even had time to pat her 15-year-old bay gelding in reward for a smooth flying change.

Regular Dutch team rider Tim Lips has slotted into sixth place on Bayro on a score of 26.0 and three British riders occupy the next three places.

They are headed by team anchorman Oliver Townend, who has been grounded for some weeks after a fall. He put in a solid performance, bar a slight stumble in trot, and is in seventh place on his dual Kentucky winner Cooley Master Class (27.6). Individual runner Kitty King (Vendredi Biats) is eighth on 27.9.

The 2009 champion Kristina Cook, currently ninth on 28.3, is back on the team with a well-behaved Billy the Red. They were dropped from the team last year due to the Balou de Rouet gelding putting in some occasionally explosive Dressage performances.

The Belgian team, which is seeking one of the two precious Olympic qualification slots for Tokyo 2020, is in third place with a team total of 90.9; France, Ireland, and Italy follow, with just 3.4 penalties covering the four nations.

Attention is now focused on the Cross Country test designed by Mike Etherington-Smith, who has re-routed the track, allowing plenty of alternative routes while warning that they will cost in time penalties. “It’s beautifully designed and built,” commented Townend.

“I’m a fan of Mike Etherington Smith’s courses. There are no blind questions. If you’re on your line and you and your horse are focused on the job, it should ride well.”

“The way the fences are situated, it’s very easy to make a mistake,” added Townend’s teammate, Kristina Cook, a veteran of nine Europeans and, with pathfinder Pippa Funnell, a member of the winning British quartet 20 years ago here in Luhmühlen.

The overnight leader Michael Jung is also appreciative of the 26-fence track: “It’s a very fair course; to be in the time you have to be fast, you have to take a little bit of a risk, and as faster as you go, as easier you can have somewhere a little mistake.”