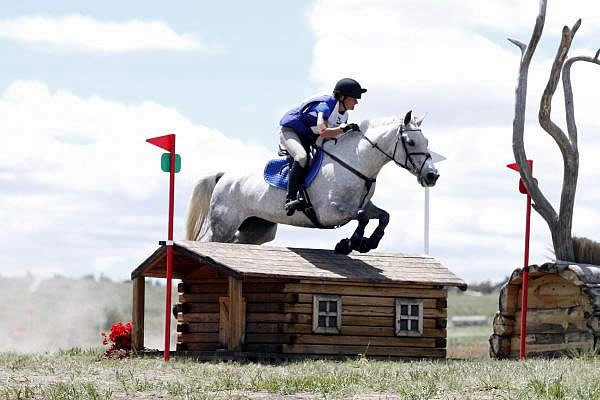 Parker, CO – June 1, 2013 – Many competitors had rave reviews for cross-country day at the Colorado Horse Park’s CCI*/Training Three-Day/Horse Trials, but Julie Wolfert had more reasons than most to be happy. Wolfert turned in three double-clear cross-country rounds to cement her lead in the CCI* with Buenos Dias, taking over the lead in Open Intermediate with Buenos Aires, and moving up a notch from fifth to fourth in Novice Horse with Vindicated.

“She was fantastic,” Wolfert said of CCI* mount Buenos Dias. “It was really fun! I liked the last water because she jumped it so big and so fun. The course rode great and was very open. It was perfect for where I’m at and for my horse’s training.”

Wolfert was also happy with Buenos Aires’ performance in the Intermediate-level water complexes and said the best part of the ride was the bounce into water. “He had never done one before, and I thought he handled it pretty well,” she said.

She noted that Buenos Aires needed a bit of a push to get going at first. “He was a little picky and a little strong and then he finally settled in toward the end in our groove,” she said. “The course was great and it was reversed (from previous years) and I like how it rode better in this direction. (Course designer James Atkinson) gave us a lot of nice, inviting jumps, and then it got technical, and then there were some breaks again.”

Atkinson’s course design philosophy fits with Wolfert’s observations. He describes the process of building a course as one that begins with setting a track, keeping in mind the natural features of the land as well as existing complexes, and progresses to adding combinations while using the spaces in between as a way to rebuild confidence between tests.

“Once you have the track, you start filling in the combinations and trying to ask a different question at each one, whether it’s an accuracy question or a boldness question or a turning question, and trying to make them somewhat progressive through the course,” Atkinson said. “For all levels, the first water jump is quite easy, the second one is slightly harder, and then the third one is probably the most challenging.” As an example, he mentioned the Training course he’d set for this event, where several horses who hesitated at entering the initial, straightforward water complex balked later on in the course when asked to jump down into water.

“And then a pretty important part is what you do in between those combinations,” Atkinson continued. “Maybe you asked a question that was quite hard, and the horse did it, but then he’s maybe a little bit suspicious. So you have a fence or a couple of fences that the riders can just kick at, just straightforward gallop fences, where they can rebuild that little bit of confidence in the horse before that next combination.”

“My job really is to get the horse at whatever level to actually finish the course more confident than they started, and leave the rider feeling like they did some stuff that was pretty hard by the end, and succeeded.”

CCI* – Maintaining their second-place position behind Wolfert and Buenos Dias in the CCI* were Sydney Conley Elliott and SaffariO, who also went double-clear around the course. “He was fabulous,” Elliott said of SaffariO. “He is all warmblood so I was worried about him making the distance and having enough stamina to finish the course, but he surprised me.”

Elliott, who traveled from Louisiana to compete at the Colorado Horse Park, added that the course was a good place for SafarriO to make his CCI* debut. “He did really well and the course was fabulous – a great one-star course,” she said. “From start to finish, he was very confident, and I like it when a horse finishes almost better than they started. It was a perfect place for us to come for our one-star. Worth the 16-hour drive? You bet! It was wonderful.”

Third-placed Julianne Van Halst and Tristan were also making their one-star debut. “All the jumps rode really well and they were pretty straightforward,” she noted. “It was fabulous. It’s a great confidence builder and it’s lovely and a first-class facility.”

She said she was grateful to her horse for helping her out throughout the course. “There were a couple spots where he really saved my butt. He knows his job and he always takes care of me. I’m very lucky to have a horse like him.”

Caroline Smith, who rode Lucas to a double-clear cross-country round to stay within striking range of the leaders, said she trusted her horse’s athleticism to carry them through the course. “He’s very clever and very athletic,” she said. “I just try to stay out of his way as much as possible and let him do what he does best.  And isn’t that what we are supposed to do?”

“The footing was fabulous and the fences are well-built and the course was well-designed,” she added. “I loved it. On top of a pretty decent dressage, we’ll see what happens. I can’t wait until tomorrow.”

Training Three-Day – The Training Three-Day division continued to be a close battle between Summer Peterson, on Jake the Fish, and Arden Stephens, on All That Matters. Peterson held a 1.6-point lead after dressage, and it looked like she might extend that lead when Stephens had a refusal on course. But Peterson, riding just after Stephens, also incurred a refusal, allowing Stephens to move back within range of the lead.

Peterson said the refusal was disappointing but a good learning experience. “I made a stupid mistake at the corner, but as soon as I got myself organized, he was fine and went back over it and he was really good the rest of the time,” she said. “It got me a little sharper. I’m kicking myself because it was my mistake completely. He was better afterward too, because I got a little more aggressive. It was a good lesson for me.”

Peterson enjoyed her ride over the course and thought the reversal of direction from previous years helped it flow well. “I think James did an awesome job,” she said. “It really builds on itself. This course was really fun. I wish I could go do it again, right now, and do it better this time!”

Jake the Fish has particular reason to relish the cross-country course at the Colorado Horse Park, which features three water complexes: Peterson said his name was inspired by his love for water and resemblance to a sea creature. “He really likes water,” she explained. “In the winter he grows a big mustache and he looks like a big catfish.”

Open Intermediate – Hailey Rich and Kingfisher II will have a lot of ground to make up on show jumping day if they hope to catch Wolfert and Buenos Aires, who lead by over 10 points. Wolfert inherited the first-place position from overnight leaders Julie Norman and Consensus, who were eliminated after a fall at the first water complex.

Like Wolfert, Rich enjoyed tackling the challenges of the course. “I thought the new bank up to the angled brush was actually really clever,” she said. “It was an interesting question that I hadn’t seen before. I also liked the first water, where you go over barrels and then go over the table and then drop down – that was really challenging. There were definitely some different questions I hadn’t seen before.”

The final day of the CCI*, Training Three-Day and Horse Trials will offer new questions to challenge competitors. The show jumping phase will demand accuracy and precision after the arduous cross-country run of the day before. While some divisions have a clear leader after cross-country, anything can happen on show jumping day, and several divisions will be won or lost depending on how the rails fall.

Show jumping begins at 8:30 a.m. at the Colorado Horse Park; with the jog at 8 a.m. Keep track of live results at http://www.evententries.com/livescoring/15284.html.

Entry status is listed at www.coloradohorsepark.com and starting times will be on the website after 6 p.m. on May 31.