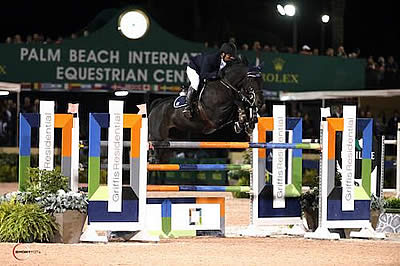 Course designer Michel Vaillancourt (CAN) saw 45 entries over his first round course for Saturday night action in the International Arena at PBIEC. Six combinations qualified for the jump-off, and four jumped double clear in the tiebreaker, where Reynoso and his 11-year-old Belgian Warmblood gelding Galip (Nonstop x Feo) crossed the timers in 35.57 seconds for the win.

Farrington was aboard his own and RCG Farm’s Creedance for the second place finish in 36.23 seconds. Jobs rode Tiny Toon Semilly to third place honors in 37.80 seconds. Colombia’s Roberto Teran, Jr. jumped the fourth place time of 38.25 second with Brilliant du Rouet.

“I am really, really happy. It is like a dream to be here, and to come from Brazil and win something like this grand prix,” said Reynoso, who is competing at WEF for the first time. “I knew that Kent is a really fast rider. I just tried to be faster.”

Reynoso continued, “I bought Galip six months ago. Since I bought him, he has just been doing better and better. Today he was just amazing.”

Reynoso grew up in an equestrian family. His father was a successful rider, and it was Reynoso’s dream to compete at the top level. He represented Brazil in the 2012 London Olympic Games and continues to develop top horses. Reynoso made the trip to Wellington for the first time to compete against the best in the world and further develop his career in the sport.

“I came because of a dream. I did everything in Brazil that I could do, and I just wanted to try something new,” Reynoso stated. “I would like to be here with a good owner and get more horses, because I like really it here.”

“This was a recovery,” Farrington stated. “I got thrown on my head last week, so that was not ideal. I thought he jumped great in the WEF (Challenge Cup) this week, and I thought he jumped great tonight. I thought my strategy was good for the jump-off, and unfortunately, we just got beat today. I think the jump-off suited a longer-strided horse. I had to add to the oxer across the middle before the double verticals, and I think that is where I lost a bit of time.”

Third place finisher, Eve Jobs (18) was competing in her first “Saturday Night Lights” grand prix at WEF and was thrilled with her top finish.

“I was just trying to go for a really nice double clear,” she said of her jump-off plan. “I tried to set the pace as best I could. I was not going to leave out in some risky places. Like down the first line, I still did the seven strides and tried to set up for the double verticals. I tried to go clear and have a good result, so I am very happy.”

“I bought this horse about a month and a half ago from Charlotte Mordasini,” Jobs said of the ten-year-old Selle Francais gelding (Diamant de Semilly x Kannan). “Right off the bat I clicked with him, and my trainer, Eddie Macken, has just kind of been putting me in the bigger classes. It has been going really well. This was the biggest we have jumped to date, and I could not be happier. He jumped amazing.”

McCahill earned a third place finish in the under 25 grand prix during week two of the circuit riding Cadensky and explained that this win was a much different experience on a horse that she knows well.

“Unlike the last time I was in the top three here, that was with a very new horse I only just got in November,” McCahill stated. “In contrast, Charly Chaplin is one that I have a stronger relationship with. I have gotten some top three finishes with him in some big grand prix in Europe this year. It was our plan all along to use him for the semi-final and hopefully the final for this year, so I was really happy with the way he jumped. He is an amazing horse.”

McCahill continued, “Charly is sort of a giant. You have to give him a lot of room. He is very careful though, for such a big horse, and very sensitive. It was a bit surprising I passed the first round clear today, to be honest. Earlier in the week, he stopped twice at the water in the Welcome, so I was not quite sure what was going to happen. That was the main area that I was focusing on clearing today. He was super. I could not be happier with his performance today.”

Unex Captain Chaos 8 is a 12-year-old Holsteiner gelding (Con Air x Landaris) that Bjorklund (23) recently began riding at the end of the summer in 2016.

“I have not had him for very long. It is just now that we have kind of gotten to know each other better,” Bjorklund noted. “He is truly amazing for me. He fits me really well and makes me feel safe. Obviously today he did an amazing job.

“This is my first bigger jump-off with him,” Bjorklund added, “so I was just kind of trying to go clear. Before I went in, my trainer Eddie [Macken] was telling me that I should try to go for it, so it was kind of in between. I started off a little slow, and then as I got more comfortable, I got a little faster. He was really great.”

Porter (19) has had several top three finishes in this year’s Under 25 Series and used the opportunity to gain more experience with his trusty mare Diamonte Darco, a 12-year-old Great Britain Sport Horse (by Unbelievable Darco).

“I have been really fortunate this season. Diamonte Darco has jumped really well,” Porter stated. “Pretty much every time that I have gone out, she is ready to roll and ready to jump a clear round. Whether I make a mistake or not is really what determines whether we get into the jump-off. I have been knocking on the door, just trying to get that first ‘W’. My trainer just keeps telling me to do what I’m doing because it is clearly working, and eventually it will fall my way.”

The Hollow Creek Farm Under 25 Grand Prix Series, presented by The Dutta Corp. in association with Guido Klatte, was developed as a bridge to the international level of grand prix competition. The series gives athletes, both human and equine, an opportunity to compete under a myriad of conditions, including jumping on grass, under the lights at night, and in team competition, all important elements that competitors will face as their international careers progress. The series concludes with a $50,000 Hollow Creek Farm Under 25 Grand Prix Final, which the top 30 riders in the point standings will be invited to contest on Sunday, April 2.

Stella Styslinger of Birmingham, AL and Mckayla Langmeier of East Granby, CT rode Cassanto in the Bruno Delgrange Large Junior Hunter 16-17 division to earn the championship title. Styslinger rode the striking chestnut to a second place finish in the under saddle class, and on Friday, while Styslinger was away at school, Langmeier guided Cassanto to first and second place finishes over fences.

Styslinger leases the 2007 Holsteiner gelding by Canto from Float On Equestrian, LLC.

“I just started riding him,” Styslinger explained. “We saw him at [the USHJA International Hunter Derby Finals] a few years ago. He was third overall that year, and we really liked him. We found out he was for lease this year, and it is a great situation because I’m going off to college in the fall. He is really easy-going, has a great personality, [is] super friendly, and is very forgiving.”

Langmeier, who had never ridden the gelding before showing him on Friday, praised his nature.

“He is really straightforward, super scopey, and he has a big stride,” Langmeier detailed. “I know he has amazing show results. My strategy was just to have smooth and consistent rounds, and he really did a super job.”

Emma Kurtz of Wellington, FL and Stellar settled for reserve honors just one point overall behind the leader. The duo won two over fences classes and placed fifth in another. Kurtz started riding the coming seven-year-old Hanoverian mare by Quintender at the beginning of the winter circuit and has found much success with her, earning the championship title in the division during weeks four and seven.

The tenth week of the 2017 Winter Equestrian Festival concludes on Sunday with the $35,000 Suncast® 1.50m Championship Jumper Classic in the International Arena. The Animo Medium Pony Hunter division will determine championship and reserve honors in Ring 12. For more information and full results, please visit www.PBIEC.com.