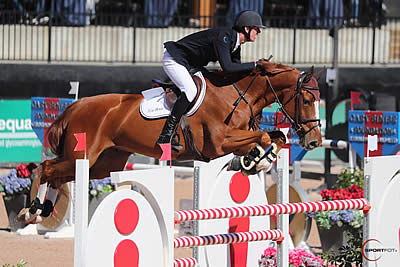 Guilherme Jorge (BRA) tested 90 entrants over his course design in the first round, with 21 pairs going clear and under the time to make it to the jump-off challenge. The class was the largest FEI Welcome Stake ever hosted at the venue to date, and the second largest class behind Wednesday’s $36,000 Power & Speed Stake CSI 5* showcasing 102 entries. Verlooy, the top-ranked FEI Jumping U25 rider in the world, recently won the FEI European Championships at Rotterdam, and explained that Igor has been on a break for five weeks before competing at TIEC:

“The course rode super today. Igor jumped very well in the first round, and in the jump-off he actually jumped even better,” Verlooy detailed. “He’s had a bit of a break: I did the Europeans with him, and then St. Tropez, and then he had five weeks off, so he’s getting back into rhythm. But I must say, he felt much better in the jump-off.”

Verlooy’s jump-off performance couldn’t be beat, and his strategy to best a strong field was to be as efficient as he could where others had gone wide, he shared. “I really wanted to give it a try in the jump-off. He’s naturally very fast, and everything went to plan in the jump-off. So, it worked out.” Verlooy continued, “After the double to the skinny, I think there I got the advantage. Everyone was going a bit wide, and there I took a very big risk and came very [straight], and I think there I made up the time.”

Placing in the top 30 as an individual at the venue for the FEI World Equestrian Games™ Tryon 2018, Verlooy noted that he’s excited to give his mount a new experience after competing abroad. “I think it’s great here. Right now in Europe there are not many shows, and it’s cold, so after I did this tour, and I must say my horse still felt very fresh because I didn’t do so much this year, I saw the schedules here and it looked very interesting. I really like it here, with different people and different jumps. You always see the same people and it’s nice sometimes to come to a different place.”

Verlooy will contest Saturday evening’s $384,000 Gary Sinise Foundation Grand Prix CSI 5* with Igor, and will do his best to keep his mount fresh until then, he said. “Next, I’ll do a few World Cups,” he concluded.

“Abelone [Abelone O.T. Lowlands Z] is an eight-year-old mare that I’ve had for four years, and we actually have a foal from her,” Kocher explained of the 2011 Zangersheide mare (Andiamo Z x Diamant de Semilly). He continued, “We just started jumping her again last year, so she’s kind of amazing. She started competing in FEI classes during WEF and she’s had a couple good results throughout the year, but this is her first win in a FEI ranking class.”

Course designer Guilherme Jorge (BRA) set the course for the largest class held at TIEC to date, with 102 entries to test the Power phase. “The course was good. Honestly, I wish it had more jumps in the speed phase,” Kocher admitted. “I feel like it was hard to make up ground, but it worked in my favor. There were 110 horses, so you had to make the time work.

“While some riders had two or three horses, I only entered her in this class; that was my strategy. I’m saving my other horses for later and I aimed her to win this class. I was at it for sure, but it didn’t go the way I thought it was gonna go. I left out a stride in the first line, then I left out a stride in the next line, and then I added in one line. It was an amazing class to win,” concluded Kocher.