Riley Ganzi won a Sportsmanship Award and was presented with a new polo mallet. She competed with Landen Daniels, Christos Magrini and Malicia Von Faulkenhausen.

While many of the players were sons and daughters of men and women polo players including Adolfo Cambiaso, Julio Arellano and Joey Casey, there were those players that were not born into families and just love horses and the sport and decided to learn how to play. They came to love polo not only because of the speed and horsemanship but also because of the dynamics of teamwork.

“It’s amazing we are attracting equestrians that are new to polo,” Ganzi said. “They just love horses and want their kids to be involved in the sport that they love and be competitive in while playing a team sport. Our Grand Champions Polo Club has done a good job at that.”

While the Marc and Melissa Ganzi have hosted several junior tournaments in the past, it was the first time the seven-year-old club hosted the Joanna Monaco Memorial Tournament.

With 94 players and 25 teams this year’s event topped last year’s figures of 68 players and 17 teams. While the majority of players were local, players from Argentina, Atlanta, Sarasota, Ocala and Vero Beach competed. Every player received an award and were outfitted in different color team t-shirts.

Both Ruiz and Magrini were members of The Polo School at Grand Champions team that captured the First Division Cup. Ruiz was named Most Valuable Player.

“I was very happy with the way I played today,” said Ruiz, surrounded by his polo-playing friends. “It was competitive. Players will get better playing in these kind of tournaments. They make friends and play polo together.”

Ruiz has been playing since he was 6 years old. “I learned from my Uncle Matias,” said Ruiz, who returns to Argentina in February after a two-month stay.

“There are so many more tournaments in Argentina; we play all the time; it’s how we get better,” Ruiz said. “We play 20 tournaments in a year. It would help polo in America to do this.” 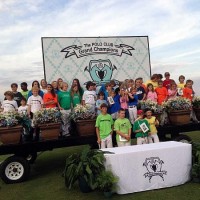 The tournament is named in honor of Joanna Monaco, a tireless, behind-the-scenes mentor of people in the working world of polo. Monaco traveled the polo circuit with her husband, Tom, a professional player and club manager.

In her era, there were many English ladies who came to the United States as grooms to whom she became a surrogate mother. Her generosity led to a program she developed to help find jobs for people in the polo world, particularly grooms.

Monaco’s door was always open and anyone down on their luck or in need of a hot meal, she would always provide for them. Monaco succumbed to cancer but her legacy lives on through the tournament.

The Florida Junior Polo Program currently allows participation up through the age of 15. A new aspect of the program has added the Young Players Program for players ages 16-21, an age group that has been overlooked in the past.

INFORMATION: There are great field side views for tournament action. Everyone is welcome to watch polo during the spring and fall tournament season and other special events including the Buzz Welker Memorial Junior Tournament, Women’s Championship Tournament and Gay Polo League Tournament.