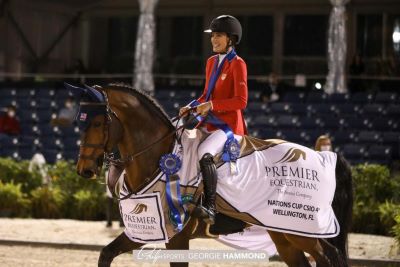 Wellington, Fla. – Mar. 8, 2021 – Top athletes from around the world visit the Winter Equestrian Festival each year to represent their countries during the famed CSIO4* Nations Cup week. Jessica Springsteen, one of the United States’ top young athletes, was presented the M. Michael Meller Style Award in honor of Kate Nash Boone on Sunday, March 7 after her winning performance with the U.S. Show Jumping team during the $150,000 FEI Nations Cup CSIO4*.

The award is given to the international equestrian who exemplifies the best riding style and maintains a sportsmanlike composure while competing in the CSIO4* at WEF during Nations Cup week. Presented in memory of Kate Nash Boone, the award is a way to honor the memory of Boone’s support and love of ‘all things equestrian.’ This award was the first of the iconic M. Michael Meller Style Awards, and was created after Boone battled cancer so that Meller could continue to hear her voice each year. Meller, of MMM Horseman, awarded the trophy to Springsteen following Sunday’s grand prix competition.

Springsteen represented the United States during the Nations Cup competition and proved to be a strong anchor for the team after her clear effort during the second round. After being a dominant force in the equitation and jumper ring as a junior, Springsteen has risen through the international ranks to become one of the top athletes for the United States. She has represented her country in several Nations’ Cup finals and has become one of the most decorated riders in the sport.

“I am so honored to win this award. It means so much to me, and it has been such a great week competing here. This is just an end to a very great week, and I am so grateful. We had so much fun Friday night. It is always such an honor to represent your country, and I have never done the Nations Cup here before, so I was excited to be named to the team, and it was really just a great night.”

Meller commented, “I believe that Jessica is one of the world’s most talented young riders. She works incredibly hard and is extremely dedicated to the horses and the sport. Jessica takes the time to really develop a partnership with each of her horses. As the anchor of Friday night’s winning team, she helped lead an aspiring group of riders on their home turf. It’s an honor to present her with the award; she truly deserves it.”