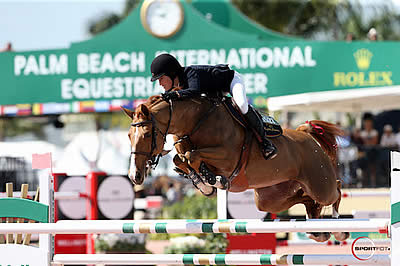 “I saw a lot of rounds before I went today,” Springsteen said of her winning track. “I knew what I had to do, which is always a nice advantage of going last. I actually added strides in places where other people left out, but she is just so fast on her own. I don’t even have to kick; I just loosen the reins and she goes.”

Springsteen purchased Tiger Lily, a ten-year-old Oldenburg mare (Balou du Rouet x Domino), at the end of 2015. The pair showed in Wellington for the first time last winter and spent the 2016 season traveling around the world.

“She is very feisty,” Springsteen described. “She always wants to go, so I have to do my best to keep her stride short and together. She is jumping again tomorrow, so I was not sure if I should go forward today, but she has so much energy that it was a good course for her. She felt great.”

“I actually was not even supposed to try her,” Springsteen detailed. “When Edwina and Jan were going to see her, I just decided last minute to go with them. I immediately loved her.”

The $6,000 Illustrated Properties 1.40m speed concluded the day with a win for Ronan McGuigan (IRL) and Capall Zidane.