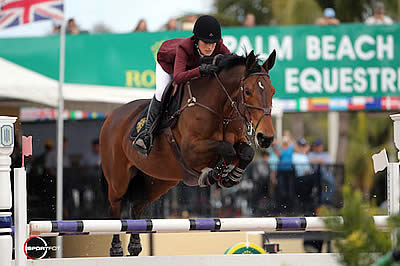 Wellington, FL – February 14, 2016 – The fifth week of competition at the 2016 Winter Equestrian Festival (WEF), sponsored by Fidelity Investments®, concluded on Sunday with a win for Jessica Springsteen (USA) and Davendy S in the $86,000 Suncast® 1.50m Championship Jumper Classic. Competing in the International Ring at the Palm Beach International Equestrian Center (PBIEC), Springsteen topped an 18-horse jump-off to win over Eric Lamaze (CAN) and Rosana du Park in second, and Meredith Michaels-Beerbaum and Unbelievable 5 in third. The 12-week WEF circuit runs through April 3 offering more than $9 million in prize money.

Bob Ellis (GBR) set his final international track of the week for 67 starters in Sunday’s Suncast® 1.50m. With big prize money on the line, 18 entries cleared the first round course to advance to the jump-off. In round two, eight of those also jumped clear on the short track.

Springsteen and Stone Hill Farm’s Davendy S got their first win of the WEF circuit with a super-fast round in 37.71 seconds. The duo pushed Eric Lamaze and Artisan Farms and Torrey Pines Stable’s Rosana du Park into second place with their round in 37.85 seconds. Meredith Michaels-Beerbaum and Windward Farm and Jessica Suida’s Unbelievable 5 clocked in third in 38.28 seconds. Fourth place honors went to Shane Sweetnam and Spy Coast Farm LLC’s Cyklon 1083 with a time of 38.87 seconds.

Springsteen and Davendy S have been in the top ribbons multiple times this season, but had yet to get a win with the fierce competition at WEF. Earlier in the week, the pair set an early pace in Wednesday’s $35,000 Douglas Elliman 1.45m Classic, but eventually settled for fourth place. On Friday, they held the lead in the $35,000 Illustrated Properties 1.45m Classic, but were pushed into second place by Sweetnam and Cyklon 1083. In Sunday’s 1.50m, it was finally their turn to take the victory.

“I was so determined to win today,” Springsteen stated. “I was really fast on Wednesday and I just messed up one line and finished fourth. Here, if you are not on it everywhere, that is what happens. Then on Friday I was second. Shane Sweetnam got my time at the very end. So today, I was just going for it, and she was amazing. She tries so hard every time.”

Springsteen made her plan with the 13-year-old Belgian Warmblood mare (Kashmir van Schuttershof x Pachat II) and tried to go as fast as she could “without losing her head.”

“When the fences are higher, you cannot go as crazy fast, so I do not think I went any faster than I have been going,” Springsteen noted. “With a class like this it is a little bit more tough. I went as fast as I could and she tried so hard. I got away with that second to last jump.”

Springsteen began training with Edwina Tops Alexander in 2015 and has also had help from Ben Maher throughout the winter circuit in Wellington.

While her top mount, Vindicat W, is sidelined with an injury, Springsteen is bringing along some new mounts this winter.

“Right now I am just focusing on getting all of my horses going well, and getting back into the groove of jumping the bigger grand prix, which I have not been able to do in a while,” she noted.

After jumping so well this week, Davendy S will now have a break before coming back to compete later in the circuit.

“Mostly I will just aim for the 5* (shows) with her, doing the speeds and the 1.50m classes,” Springsteen stated. “I will keep her in her comfort zone that she likes to be in. She is so competitive in these classes, so I will keep aiming towards those.”

Also competing in the International Ring on Sunday, Emily Moffitt secured a one-two finish in the $10,000 Sleepy P Ranch SJHOF High Junior Jumper Classic. Moffitt was the only rider to clear the first round course with her two mounts, and finished first and second aboard Poden Farms’ Thalis de la Roque and Chaplin W respectively. The $10,000 Hollow Creek Farm Medium Junior Jumper Classic was featured in the afternoon with a win for Giavanna Rinaldi and Anabelle 28.

Emily Perez piloted her own Cassanto to the Bruno Delgrange Large Junior Hunter 16-17 division championship on Sunday afternoon in the E. R. Mische Grand Hunter Field. Besting a field of 21 horses, Perez won the stake class with a high score of 88. She also placed first in the handy and earned a third place ribbon in another over fences class. Lilli Hymowitz rode Rose Hill Farm’s Garfield to the reserve honors, earning a first and two second place ribbons over fences and a fifth in the under saddle.

Perez, of Pittsford, NY, is a 16-year-old junior at Pittsford Southerland High School. She commutes to Wellington on the weekends in order to compete with her horses in the junior hunter, equitation, and junior jumper divisions. She has been riding for eight years, beginning at a local barn in Rochester, NY. Three years ago, she decided to move to Heritage Farm in order to pursue a more competitive junior career.

Besides riding horses, singing is another one of Perez’s talents. She takes voice lessons near her hometown in Rochester, NY, where she often sings in recitals and at local events. This past summer Perez sang the national anthem for the CSI 3* Grand Prix at the Tryon International Equestrian Center.

When Perez originally purchased Cassanto two years ago, he was meant to be her equitation horse. When the pair began competing in the hunter divisions to build on their partnership, it became clear that the nine-year-old Holsteiner gelding could be a rather fancy hunter. Perez then decided to focus on the hunters with Cassanto.

Perez enjoys showing her gelding in the E. R. Mische Grand Hunter Field because of the ring’s physical openness, which allows more flow on course. “It went really well for me this week,” Perez remarked. “I thought today he was jumping really well. I enjoyed the courses as well. Today there was a line going to the right and he really opened up his right lead for me and made a great effort.”

“He’s got a really cute personality. He knows he’s really special,” Perez said about her beautiful chestnut gelding. “He’s super brave and always does whatever you ask him.”

Perez looks forward to showing Cassanto in the Large Junior 16-17 division next week during WCHR hunter week. She hopes to qualify him for the WCHR Peter Wetherill Palm Beach Hunter Spectacular, which will take place in the International Arena on Saturday night of WEF six. “I also really want to compete in a hunter derby this year,” Perez said about her future goals with Cassanto. “They are so fun.”

WEF continues in week six with World Championship Hunter Rider (WCHR) competition featured in the International Ring from February 17-21, 2016, while the international jumpers compete at The Stadium at PBIEC, both in the Global International Ring and the grass derby field, in their CSI 3* events all week. For more information and full results, please visit www.pbiec.com.