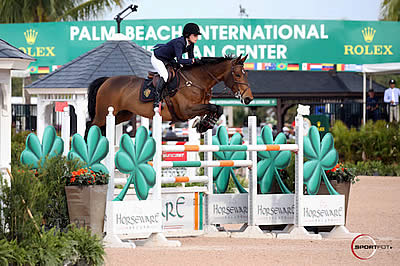 Michel Vaillancourt (CAN) set the speed track for 67 starters in Friday’s 1.45m with 12 clear rounds. Springsteen finished two mounts in the top six for the day. She was first to go in the morning with Stone Hill Farm’s Tiger Lily, setting the pace in 68.66 seconds, and eventually placing sixth. Twelve rounds later, Lamaze and Artisan Farms LLC’s Melody des Hayettes Z took the lead in 65.42 seconds, but later settled for third place. Wednesday’s 1.45m winners, Menezes and Caruschka 2, briefly took over the top spot in a time of 64.98, but were soon pushed from the lead. Four rounds later, Springsteen and Davendy S finished in 63.42 seconds and held on for the win.

Springsteen went first with Tiger Lily, a nine-year-old Oldenburg mare (Balou du Rouet x Domino) that she purchased in November. As she is just getting to know the mare, she went a little easier in their round, but was happy with a great finish.

“She jumped really well,” Springsteen stated. “I was going to go kind of quick with her, but not as tight anywhere, so I think that is where I ended up a little slower. She is so careful, so it is good to start being a little bit more competitive in these classes with her.

“I got her in November, but she ended up just staying in Europe, so I did not ride her until she got down here for the winter,” Springsteen detailed. “She is only nine. I think she moved up a little bit before we got her and did a 1.50m, but she does not have as much experience as Davendy, so I am kind of just getting used to her. She is a little bit quirky and a little bit fresh, so I am figuring out how to prepare her the right way. She is great; she is super competitive, and she is really careful, so I am excited about her.”

With one successful round already completed, Springsteen knew what she had to do with Davendy S to get the win. She has had a great circuit with the 13-year-old Belgian Warmblood mare (Kashmir van Schuttershof x Pachat II), also winning the $86,000 Suncast® 1.50m Championship Jumper Classic during week five, and felt confident in her ride.

“I was going to jump her yesterday, but she is so good at these classes, so I thought today I had a better shot,” Springsteen noted. “I was just going for it today. She is so fast on her own, so I knew as long as I did the turns that I would be right up there.”

Springsteen did not see the leading round of Eduardo Menezes just before her, but she did get to see Lamaze’s early round and was able to judge her plan from that.

“Once I saw Eric go, I had an idea of what I needed to do,” she stated. “I was really fast after the double, then I knew I had to take a hold of her a bit for the triple, and then I added one down to the next oxer. In the middle part of the course that was kind of an ‘S’ shape, I was pretty on the gas, so that is probably where I made the time up.”

Springsteen began training with Edwina Tops Alexander and Jan Tops last year, but while she is in Wellington, she has had the help of British Olympic team gold medalist Ben Maher.

On training with Maher this winter, Springsteen stated, “It has been great. He is so much fun to work with. He is so laid back, and he is really clear, and easygoing. You always feel confident when you go into the ring, and I think that is the most important thing. I love working with him.”

Also competing in the International Ring on Friday, the $6,000 Illustrated Properties 1.40m Speed Challenge was held in a California Split with a win for Daniel Coyle (IRL) and Susan Grange’s Tienna in Section A, and victory for Hannah Selleck (USA) and Descanso Farm’s Callway do Cabo in Section B.

Twenty-year-old Allison Cederberg, of Billings, Montana, made a big move up to win the Ariat National Adult Medal on Friday. Coming into the test in fourth place, Cederberg and Zero Tolerance, a 12-year-old Dutch Warmblood gelding by Roven owned by Dru Cederberg, put in a great effort to ascend to first place.

Of her rides today, Cederberg described, “My first round I was a little bit too conservative. I had a couple of jumps where I added one (stride) too many, but he was really good to me and covered it up. In the test, it was actually really good that I went first. I didn’t have a lot of time to think about it; I just had to go. The rollback is what really helped me. He was so good to me there. I haven’t done a lot of equitation classes on him, and we haven’t practiced it at all. I just went for it. He was really good after the fourth jump to come right back and halt.”

Originally imported by the Cederbergs four years ago, it wasn’t a perfect match from the start for Allison and “Zero.” She recalled, “We brought him in as a hunter. We didn’t get along at all at first. He was for sale when he first came here. We had an awesome first weekend and were reserve (champion) in the Adult Amateurs, and we decided to keep him.”

The pair has learned from each other through the years as their partnership improved. “He used to kind of be my trouble horse, but now he’s one that I can count on to go in the ring and help me out,” she said.

Cederberg is a student at Colorado State University and makes time to compete at the Winter Equestrian Festival on the weekends. This is her second year competing at WEF, but this was her first win in the Ariat National Adult Medal.

“I’ve never won a medal, so this is really exciting,” she said.

The tenth week of competition at the 2016 Winter Equestrian Festival continues on Saturday with the $130,000 Horseware Ireland Grand Prix CSI 3* to begin at 11 a.m. in the International Ring. The Alessandro Albanese Equitation 15-17 championship will be presented in Ring 8 in the afternoon. For more information and full results, please visit www.pbiec.com.