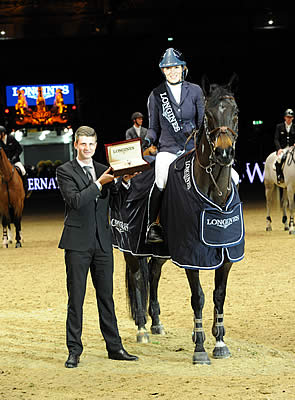 British rising star Jessica Mendoza’s first campaign in senior classes at Olympia, The London International Horse Show, got off to a spectacular start with a brilliant win in the Longines Christmas Cracker on a sell-out evening.

Fifteen horses went through to the jump-off, six of them British, and Laura Renwick threw down the challenge with a superb round on her World Cup horse, Bintang ll, for 33.09 seconds.

But then Jessica pulled off an astonishing tight turn in the air on her brilliantly nippy Spirit T. The crowd gasped, and there was a worrying split-second when the mare rattled the first part of the double, but they continued clear and flew across the arena to the last without taking a pull.

Other riders copied, but none could catch a committed Jessica, even though the experienced Swiss rider Pius Schwizer on PSG Future came with a fraction of a second to take the runner-up spot, ahead of Laura Renwick.

“Everyone was going so quickly; I knew I had to do something,” said Jessica afterwards. “When I went into the arena, the turn looked horrible, but I knew I wouldn’t win if I didn’t do it.”

Jessica, who played a key part in achieving Britain’s Olympic qualification at the European Championships in Aachen, admitted that an international win was her big ambition for the weekend, but she has plenty more chances to impress.

At only 19, she is still eligible for the Dodson & Horrell and World Class Programme Under-23 Championship tomorrow and she has Spirit T, a 14-year-old bay mare, for the Longines FEI World Cup qualifier on Sunday and a younger horse for Monday’s Olympia Grand Prix.

Earlier, British rider Guy Williams on Golddigger pulled off an equally thrilling victory in the Levy Restaurants Snowman Stakes, in which riders were drawn in seven groups, with the fastest clear in each going through to a jump-off.

With the suspense building, it took until the last group to produce a British representative in the jump-off, and the crowd erupted into loud cheers as Guy conjured a bold clear in 58.79 seconds, the second fastest of the competition, from the willing Golddigger.

The pair was second last to go in the jump-off and the 16-year-old stallion boldly took strides out and produced huge leaps on angles.

Only German Hans-Dieter Dreher on Callisto could have beaten Guy, but, to gasps, the white-faced bay gelding put in a sharp stop when asked to make a tight turn.

Guy explained: ‘Golddigger is difficult to ride indoors because he’s got such a massive stride, but he’s such a good horse and will do anything for you.’

Dutch rider Jur Vreiling, a European team gold medallist this year, set the evening alight when triumphing in the Christmas Speed Stakes on Arezzo VDL ahead of France’s Simon Delestre (Stardust Quinhon) and Beh Maher (Boomerang). He took it in good part when taking a tumble in prize-giving and was laughing as he left the arena.

Boyd Exell will be in pole position in tomorrow’s final of the FEI World Cup™ Driving, presented by Dodson & Horrell, after producing a performance of pin-point accuracy under pressure.

The Australian, recently named the Reem Acra FEI Athlete of the Year, kept his head in a tense drive-off against experienced Dutchman Ijsbrand Chardon and the exciting young Belgian Glen Geerts. Despite having a ball down, the world champion was five seconds faster than Chardon.

‘The crowd was magnificent and spurred my horses on,’ Exell said. ‘They were flying. When I had a ball down, my navigator said, “You’d better up the pace now!”’

International event rider Pippa Funnell appeared in a new guise – as groom/navigator on the back of a carriage pulled by a pony from the World Horse Welfare, Olympia’s Charity of the Year.

In a light-hearted competition, the grooms were handed a bucket brimming with ice they could throw at a nominee of their choice. This turned out to be Roly Owers, the charity’s chief executive, who took his dousing in smiling good heart. ‘It is for a good cause, after all,” he laughed.

Pippa added: ‘This is the worthiest of causes. All the parents out there being pushed by their children to buy them a pony for Christmas, think instead of offering a good home to one that really needs it through World Horse Welfare.’