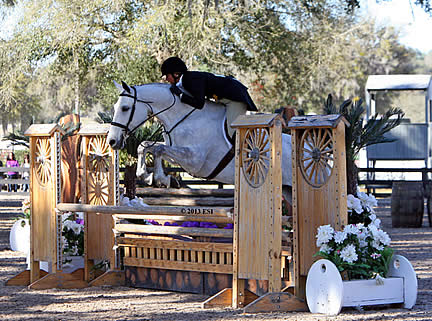 OCALA, FL (February 18, 2013) – Jennifer Alfano got down to business at HITS Post Time Farm in Ocala, Florida, and won the $10,000 Devoucoux Hunter Prix this weekend. Alfano of Buffalo, New York and Sharon O’Neill’s Rose Hill rode to a sweet victory and a $2,800 winner’s check. Sweeter than usual, however, the win marked a storied return back to the competition ring for Rose Hill.

“She is only eight years old and underwent colic surgery last May,” said Alfano of the Warmblood mare that carried her to the blue. “She just started showing again and I am really excited to have her back.”

The scenery changed this week for hunter prix riders as they moved to the main hunter ring and showed over a course designed by Doug Russell of Ocala, Florida.

Alfano was second going into the final round after a score of 86, right behind Winn Alden of Bristow, Virginia aboard Barbara Sheffield’s Cameo Appearance with an 87. Alfano was tenth to return in a 12-horse second round and rode to an impressive 89, which was just enough to deliver the win. Alfano also piloted Rose Hill to a second and third-place finish in two HITS Ocala Devoucoux Hunter Prix earlier in the circuit.

Despite the chilly weather that rolled in and prompted some frisky antics from several horses during the class, Alfano admits that Rose Hill was focused and pretty unflappable throughout the day.

“She walked right into the new ring and got it done,” said Alfano of Rose Hill. “She is so easy and fun – she is the kind of horse that everyone wants in their barn.”

After an 86 in round two gave him a total score of 173, just two points below Alfano, Alden and Cameo Appearance finished second. Amanda Steege has already been in the Devoucoux Hunter Prix money several times this season and rode to third yesterday with Susan Darragh’s Zidane. They boasted an overall score of 167.5.

Another familiar face in the top five with two wins already pocketed, Shachine Belle of Farmington, Connecticut and Robin Swinderman’s INXS finished fourth with a score of 166.75. Paul Mathews of Somerset, Virginia fell just short of Belle and rounded out the top five with a 166.5 on Terry Morrison’s Carino.

With four more qualifying opportunities for the Diamond Mills $500,000 Hunter Prix Final during the HITS Ocala Winter Circuit, Alfano is hopeful that Rose Hill is the horse to get her to HITS Championship Weekend this fall. “She’s a perfect horse for that class. She shows in the 3’6” Performance Division and was champion this week, so she is really getting back into form.  We definitely hope to qualify and ride in the $500,000 class in Saugerties,” she said.

Amy Zettler of Aldie, Virginia bested 52 to pilot her own Glad Rags to the top of the $1,500 HITS Hunter Prix this weekend at HITS Ocala. After a second-place finish last week, Zettler is sitting near the top of the rider standings for September’s HITS $250,000 Hunter Prix Final.