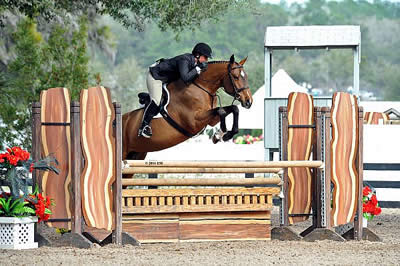 Jennifer Alfano and Maggie May. Photo By: ESI.

Wellington, FL – March 3, 2015 – During the HITS Ocala Tournament VII, Jennifer Alfano and Billie Steffee’s Maggie May topped the High Performance Hunters with fantastic results. Even though it is only the mare’s first year in the High Performance division, she’s already turned in some impressive scores and is making a name for herself as a horse with an incredible amount of class.

The pair won two of the over fences classes and clinched away the first place under saddle. The bay Brandenberger mare floated also collected the third place in the handy to complete the division as its champion.

Candid, owned and ridden by Alfano, continued his success after winning the championship in the Second Year Green Hunters last week. He won two of the Second Year Green over fences trips against stiff competition. The gelding remained consistent as the division continued, claiming the fourth place over fences and the third in the under saddle. They finished up the division by securing fifth place in the handy.

Sterling Moon, owned by Kathy Chiaf, and Heartbreaker, owned by Barbara Kearney, each collected good ribbons in in the Pre-Green Hunter division.

Alex Trolli once again shined in the Low Junior 3’3″ Hunters, riding Hey Sailor to the division championship. She captured the first place finish over fences, as well as the second place in the under saddle with the BTRC-owned horse, while also riding her own Del Piero to good ribbons throughout the division.

Based out of Buffalo, NY, SBS Farms’ Susie Schoellkopf and Jennifer Alfano run one of the foremost show hunter training operations in the country, and travel nationwide to compete in the nation’s most prestigious horse shows. SBS Farms, Inc. continues the proud tradition of the Saddle and Bridle Club as one of the top show stables in the northeast. Schoellkopf is also the Executive Director of the Buffalo Therapeutic Riding Center, which houses both The Buffalo Equestrian Center as well as SBS Farms. Built in 1922, the 160-stall facility is a historical landmark, with its unique English Tudor and gothic style architecture.