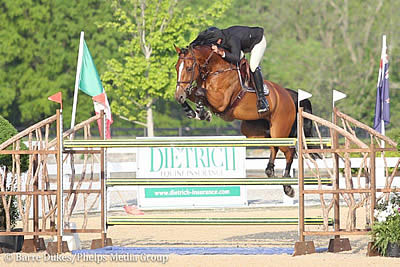 Lexington, Ky. – May 11, 2018 – Friday morning at the Kentucky Spring Horse Show welcomed the $5,000 1.45m Open Jumpers to kick off jumper competition in the Rolex Stadium, where athletes were tested over Alan Wade’s (IRL) 15-effort track.

First to enter the ring, Javier Fernandez (MEX) and Diamond Dream, owned by Patricio Miguel Madero, laid down a clear round, designating the duo as the first to advance to the immediate jump-off. Fernandez and the 10-year-old Dutch Warmblood mare galloped through the timers in a speedy 33.073 seconds, which the following 34 athletes attempted to catch, but were unable to outdo, awarding Fernandez the victory.

Out of the remaining start list, only four additional horse-and-athlete combinations produced a clear round, allowing the opportunity to continue onto the second round, with one electing to withdraw.

Savannah Talcott (USA) followed just after Fernandez with Sea Investments LLC’s 12-year-old Westphalian mare, Espatako’s Electra R, generating another double-clear round in a time of 34.113 seconds, slating her into the second place position which she managed to hold until near the end of the class. However, Anselmo Alvarado (VEN) came close to the top time aboard his own Inesse Van De Zijpe D’15 with a clear round and jump-off time of 33.437 seconds. Alvarado and the 10-year-old Belgian Warmblood mare finished just behind Fernandez for the second place ribbon, while Talcott ended in third place.

Immediately following, 21 riders entered the stadium for the High Amateur-Owner/Junior Jumpers speed-style class resulting in six clear rounds where Francesca Bolfo (USA) bested the competition aboard her own Jadalco in 66.101 seconds.

Sloan Hopson finished in a close second place in a time of 66.330 seconds aboard her own Dalida, while Marion Head and Carjo Z, owned by Scott Head, rode to a time of 68.690 seconds for third place.

Hunter competition commenced at the Kentucky Spring Horse Show on Friday in the Claiborne Ring with the Ariat National Adult Medal. Eight amateur athletes and their mounts vied for the top prize of the morning, but it was Jennifer Speisman and HC Sport Horses’ Big Star who put in a solid test that would give them the blue ribbon.

Riders in the Ariat National Adult Medal were first asked to compete over a course of eight fences, where they then received a numerical score that would dictate which four athletes would return to perform a specific test requested by the judge. Riders who scored 79 or higher during the first round of competition were asked to return to complete a test that involved three fences, a halt and a counter-canter.

Speisman and Big Star, a 12-year-old Dutch Warmblood gelding by Verdi, expertly tackled both rounds of the medal class. In the first round, the team put in a score of 80, which put them in second place heading into the second round of competition. When asked to return to perform the test, they continued to work together to execute all elements of the work-off perfectly.

Second place was claimed by Lily Walton and her own Callahan, an 11-year-old Oldenburg gelding. Walton put in the highest first round score of the day with an 84. In third place was Emma Witham and Check It Out 5.