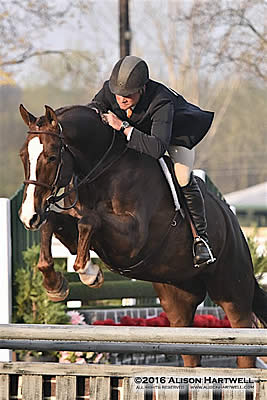 Jason Berry pilots Falcor to the win in the $2,500 USHJA National Hunter Derby.

Week I of the Atlanta Spring Classic is underway and Jason Berry of Staunton, Virginia is already on a winning streak after clinching the $2,500 USHJA National Hunter Derby, presented by Legend, and the $5,000 Horseflight Open Welcome!

Berry bested a field of thirteen horse and rider teams in Thursday’s $2,500 USHJA National Hunter Derby, presented by Legend, in the irons of Willoughby Stables’ Falcor. The pair earned a first round score of 90 and second round score of 89 for a total of 179.

Berry’s second mount in the class, Oak Ledge Farm’s Cobalt Blue R, followed Falcor after earning a Classic round score of 86 and a Handy score of 90 for a total score of 176.

Julie Curtin of Woodstock, Georgia followed Barry into third place with Susan Scherer’s Vanquish after earning a first round score of 82 and a second round score of 92 for an overall score of 174.

Cape Capital, owned by Susan Friedland and ridden by Lauren Kissel of Canton, Georgia, earned fourth place after posting a Classic round score of 88 and a Handy score of 85 for a total of 173.

Fifth place was awarded to On the Rocks, owned and ridden by Morgan Connoly of Buford, Georgia, who earned a first round score of 81 and a second round score of 87 for a total score of 168.

Sixth place was awarded to Suntrust, owned by Sandra Ward and ridden by Jacqueline Ward, after the pair posted a Classic round 78 and a Handy round of 84 for a total score of 162.

Curtin returned for the seventh place ribbon, this time in the irons of Charlotte Warren’s Enticement, after posting a first round score of 83 and Handy round of 74 for a total of 157.

Eighth place went to Megan Kerpsack of Austin, Texas and her own Finnie after earning a first and second round score of 76 for a total of 152.

After collecting his blue ribbon in the Hunter Arena, Berry moved to the Olympic Grand Prix Stadium and the $5,000 Horseflight Open Welcome.

Paul Jewell of Lambertville, New Jersey set the course with a first round time allowed of 84 seconds. Berry and Willoughby Stables’ Varios and Amanda Forte of Glenmoore, Pennsylvania, riding Cerulean Stables’ HHS Louis, were the only two horse and rider teams to turn in clear first rounds.

Kris Killam of Naples, Florida and Helene Jones’ Skyfall were the fastest of the four fault rounds and posted a time of 76.611 seconds, earning a third place ribbon.

Corini, owned by Darragh Kerrins and ridden by Paul Macrae of Alpharetta, Georgia, placed fourth after posting a four fault first round in a time of 77.529 seconds.

Killam returned for fifth place, this time in the irons of Mandy Killam’s Black Diamond, after turning in a four fault first round in a time of 77.910 seconds.