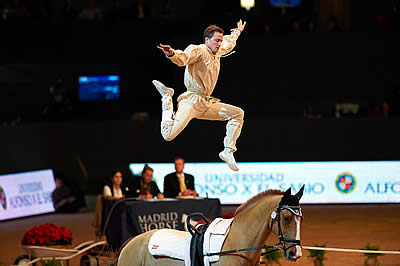 Madrid (ESP), 27 November 2015 – Switzerland’s Simone Jäiser and Germany’s Daniel Kaiser got their FEI World Cup™ Vaulting 2015/2016 campaigns off to the perfect start when coming out on top at the opening round of the five-leg series in Madrid, Spain tonight.

All but one of the athletes starting at this first event competed on borrowed horses, with French vaulter, Anne Sophie Musset, the only one to travel with her own trusty steed, Papillon de Laume and lunger Daniele Agnus. But the rest coped remarkably well with unknown horses and lungers, and Jäiser and Kaiser really rose to the challenge to reign supreme in the Individual Female and Male competitions respectively.

It was not the smoothest of victories for Jäiser, who had to settle for runner-up spot in yesterday’s first test won by Isabel Fiala. The 22-year-old Austrian, who with her own horse Catman 2 and lunger Christina Stieglitz was a winner at CVI3* in Pezinok, Slovakia in June, scored 8.214 to take pole position with Rubin Royal 20, the 14-year-old gelding that competed for the Spanish Squad at this summer’s FEI European Championships in Aachen, Germany.

Jäiser, individual gold medallist in Aachen, was partnered with the 21-year-old Simbal and lunger Diane Fraser when scoring 7.807 for second place, while Musset lined up third on 6.934 and Austria’s Daniela Fritz, also vaulting with Simbal, finished fourth on a mark of 6.383.

Musset produced tonight’s top mark of 7.995, but Jaiser’s second-place score of 7.978 was good enough to overtake Fiala in the final rankings, the Austrian vaulter’s 7.761 leaving her trailing by 0.387 for third place in the second competition.

“I’m happy!” said Jäiser afterwards, “especially considering I was riding a new horse that I only jumped on one day before the World Cup began! It wasn’t easy for any of us but in the end I had a good feeling” she added. The experienced 29-year-old who hails from Zurich said she “missed some little highlights” in her performance because she felt she didn’t want to take too many risks on a horse she didn’t know, but she was delighted to collect her first points in the series. And she’s now looking ahead to picking up some more, at the third leg of the series in Salzburg, Austria in a week’s time and in Mechelen, Belgium in December.

In contrast, Kaiser threw down the winning score last night and returned to top the line-up again this evening for an indisputable victory. In fact all three placings remained the same, with Switzerland’s Lukas Heppler lining up second on both occasions and Italy’s Francesco Bortoletto finishing third.

Kaiser also partnered with the 21-year-old Simbal and lunger Diane Fraser, and although the mark of 6.980 awarded by Austrian judge Anita Flamand Prochaska for his work with the horse was not the highest tonight, the technical marks of 9.266 and 8.593 awarded by Austria’s Elisabeth Mueliner and The Netherlands’ Rob de Bruin and the artistic score of 7.890 from Czech Republic’s Dalibor Blazek reflected a very polished performance.

The 29-year-old German, whose vaulting career has been interrupted by injury, was really pleased with his result. “It’s my first time to compete in the World Cup since the Final in my home town of Leipzig in 2011, so this win is very special for me!” he said. He was very grateful to the people who supplied horses for the competitors, but he wasn’t on completely unknown territory in Madrid.

“I came here to this show last year to give a vaulting demonstration – to come back and win in competition makes me very proud and happy!” he said. Kaiser has been vaulting since he was just six years of age. “This sport is very important in my life, and I really enjoy it as much as ever,” he pointed out. He knew it would be a challenge to compete on an unknown horse, but he was determined to put on his best show for the spectators.

He’s going to be a busy man before the third leg in Salzburg next week because the vaulter is also a professional photographer and will be flying back from a shoot in Dubai in order to compete. “I’m hoping to compete in Mechelen and in Leipzig as well, because I really want to qualify for the final!” he pointed out.

Meanwhile, the second leg of the FEI World Cup™ Vaulting 2015/2016 series kicked off in Paris, France tonight and will conclude tomorrow evening.

For further information on the first leg of the FEI World Cup™ Vaulting 2015/2016 series in Madrid, Spain, go to www.madridhorseweek.com or contact Press Officer Alejandra Cámara, a.camara@madridhorseweek.com, +34 609 915 944. The second leg of the series takes place in Paris this weekend, and for all details of the French fixture, visit http://en.salon-cheval.com/ or contact Press Officer Isabelle Fabre, isabelle.fabre@comexposium.com.