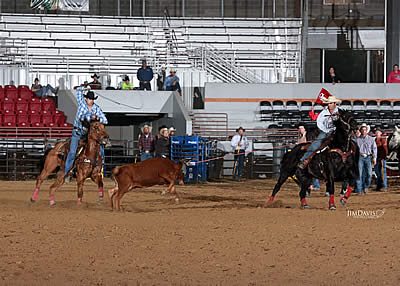 Jacksonville, FL (January 27, 2016) – For the tenth year in a row, the Jacksonville Equestrian Center and its 80 acres of premier horse facilities will play host to the National Team Roping League (NTRL) Finals. This exciting event will take place on January 28-31, offering fierce competition for qualified team ropers and exciting action for spectators.

Team roping’s top contenders will compete for over $500,000 in cash and prizes over the course of this four-day event presented by Wrangler and Lubrisyn.

The NTRL was founded in 2004, and offers a wide variety of divisions so team ropers of different backgrounds and abilities can participate. According to John Johnson of JX2 Productions, which produces the National Team Roping League Finals, even the high-caliber NTRL Finals will offer competition for ropers of all skill levels. “We’ll have everything from a professional roper to a beginner novice roper there competing,” Johnson said.

Competitors qualify for the NTRL Finals by competing in other team roping events, of which the NTRL offers over 60 per year. The National Team Roping League Finals is the number-one paying team roping event east of the Mississippi, so it isn’t hard to draw a crowd of competitors vying for prizes to this show.

“There will be ropers from as far north as New York and as far west as New Mexico, Oklahoma City, and Texas,” Johnson said. “We cover quite a large area.”

With an anticipated 600 horses, the 2016 NTRL Finals requires a facility large enough to accommodate high numbers. Combined with the favorable Florida weather and a convenient location, the Jacksonville Equestrian Center has been the obvious top choice to host the NTRL Finals for the past 10 years.

“The Jacksonville Equestrian Center is a great location for people to get out of the cold during this time of year, but it’s not too far south to be difficult to get to,” Johnson explained.

For team roping fans or anyone else who is interested in witnessing this intense sport first-hand, the Jacksonville Equestrian Center offers free admission and parking throughout the NTRL Finals. Beginning at 9 a.m. Thursday, January 28 until 8 p.m. every evening during the event, spectators can see the talented horses and riders in action.

Johnson said, “The NTRL Finals is a great event for anyone who wants to come watch a true cowboy sport that originated in the West. There will be some really outstanding horses.”

The Jacksonville Equestrian Center is a multifaceted facility that is a popular destination for equine, sporting, and recreational events. Equine amenities include an enormous indoor arena, outdoor arenas, and over 400 permanent stalls. Additional RV hook-ups and vendor spaces make it the perfect place for any event. For more information and event listings, visit www.jaxequestriancenter.com or call Penny Gorton at 904-255-4227.