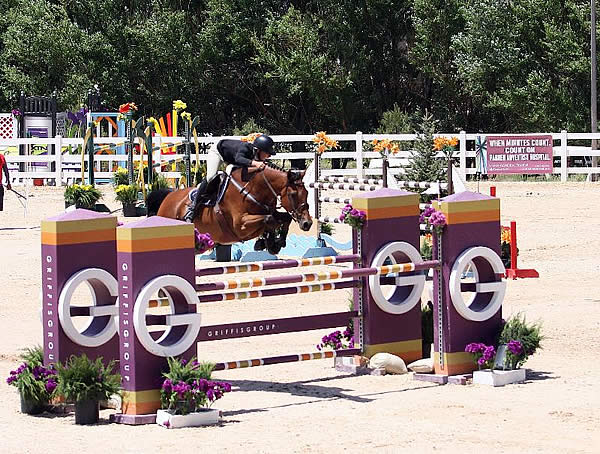 Parker, CO – June 20, 2013 – The $15,000 Open Welcome Stake was the highlight of the day in the Kathy and Brad Coors Family Grand Prix Arena at Colorado Horse Park’s Summer in the Rockies III. Kristen VanderVeen used Bull Run’s Le Conte’s huge stride to her advantage and eventually earned the victory gallop.

“I thought that the Welcome should be just that – a welcome,” said Wade. “There was some real variation in the field. There were some really nice horses and there were some inexperienced horses and riders. They got around. Some had a little difficulty. It was a nice flowing course. This is my first time in Colorado and I didn’t want anything tricky – I just wanted a nice course. I put up most of the fences in the second round. Some of them coped with it and some of them didn’t. Overall, I am quite happy with it.”

Twenty-two horse and rider combinations tried their hand at Wade’s track, and 12 earned the opportunity to compete in the jump-off round.

The first horse and rider team to return for the short track was VanderVeen and Bull Run’s Le Conte. The round was smooth and effortless over the raised obstacles. The pair laid down a time of 34.623, which would stand as the fastest of the field and eventually earn them the win.

Bjorn Ikast and Royal Flush had the next fault-free round with a time of 41.142. Then Amanda McConnell and Leon D’Or sped around the short course cleanly in 36.113, putting them in second place. Bryn Sadler and Bon Giorno and Matt Cyphert and Lochivar both went double clear with times of 38.376 and 38.670 respectively. Then, Ikast returned on the Summer in the Rockies II $15,000 Open Welcome Stake winner, Colorado, owned by Bovee Limited Liability Partnership. The pair left all the rails in their cups in a time of 38.051, landing them in third place.

“It has been a huge blessing for us,” VanderVeen said. “I thought the course was great. For this horse, it rode really nice. The lines were, for the most part, set up so you could stay on a bend and come a little forward into the combinations. He’s so lofty in the air – that’s great for me and it really helped me in the jump off. I could leave off into a combination, just because he’s so careful and still make it out clean. For him we made up a lot of time.”

“The skinny by the in-gate was a little tricky with the slow six going to an oxer to a one-stride,” she continued. “My other horse, the mare (Bull Run’s Holy Smoke) who was 10th, is very new to me, but she is also incredibly strong. So it was a bit of a workout. She tries her heart out but, man, is she bold. She wants to go, which is great. I prefer that any day over the opposite. So it was a little difficult to add a stride to a skinny and still jump it clean. It worked.”

“The course was great. It was really inviting, it rode well – a really nice speed course. I really liked the way the lines were set up,” said Ackeren. “The inside turn to the sailboat oxer would set you up for that seven but it ended up being a little short – you had options whether you could leave it out or add it in. It gave you options for what was best for your horse.”

“Vernon G is a competitor,” she continued. “He walks in the ring and he has this focus, more focus than I have. He comes around the turn and he measures where he is. When he’s not in the ring, he’s wild all the time. He gets ridden a lot and he never runs out of energy. He’s kind of hard to handle but he is the sweetest horse ever. He loves people.”

Ackeren’s goal for the week is to be consistent in the High Amateur Jumpers. “It’s great that they have the $10,000 classics, because it’s big,” she said.

“She’s jumping great and we’ve been getting along really well,” said Babcock. “She has a really big step and that takes care of a lot of the speed, but she goes fast too. I just try to turn tight and keep her moving in the turns. Guardian is probably one of the easiest horses I’ve ever ridden because she carries herself so well and she is such a kind soul that I really just have to ride and she will go for anything.”