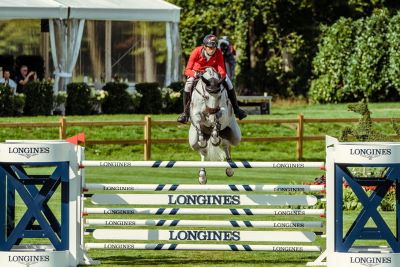 Switzerland moved into the lead in the first round of the Team competition at the Longines FEI Jumping European Championships 2021 at Riesenbeck in Germany. However, the same three countries continue to dominate the leaderboard, with the overnight leaders from Sweden now in third behind the hosts from Germany who maintained their second-place ranking.

With one more day to decide the team medals, the result is still very much hanging in the balance because the margins are really tight.

The Swiss start with a score of 5.47, thanks to superb clears from Elian Baumann (Campari Z), Martin Fuchs (Leone Jei), and Steve Guerdat (Albfuehren’s Maddox). Second-line rider, and at 24 years old the youngest on the team, Bryan Balsiger faulted just once on the 14-fence track when the grey mare AK’s Courage hit the water-tray oxer at fence 10 in an otherwise super round.

However, they don’t have even a fence in hand over Team Germany who added just the four picked up by their last man into the ring, David Will. Will and C Vier fell afoul of the second element of the penultimate double of oxers, which proved hugely influential throughout the afternoon.

His team-mates Andre Thieme (DSP Chakaria) and Christian Kukuk (Mumbai) had both put zeros on the board while Marcus Ehning and Stargold picked up five faults. By the time Will set off, a clear from him would secure the advantage for the host nation going into the final day. His single mistake moved their scoreline on to 8.77. but it still leaves them ahead of the first-day leaders from Sweden, who slipped to third when Rolf-Goran Bengtsson and Ermindo W were the only pair to keep a clean sheet for their side.

Bengstson was delighted with his horse’s performance, and despite the slip down the rankings, he reckons the Swedes shouldn’t be written off yet for the title. “It’s still wide open – Peder (Fredricson) and Douglas (Lindelow) were unlucky, and I didn’t see Angelica (Augustssib Zanotelli) go, but she only picked up four faults too.

“Sometimes it’s good not to be in front on the last day because that means the other teams have to go clear and they feel the pressure. But we need clear rounds tomorrow, that’s the thing!” he said with a big smile.

Both Andre Thieme’s DSP Chakaria and Christian Kukuk’s Mumbai were at the Tokyo 2020 Olympic Games just a few weeks ago, and yet produced two fantastic rounds for Germany.

The two riders talked about how the trip to Japan proved developmental for both horses.

“We all said if she’s sound and fresh when she comes home, and the jumping feels normal and loose, then we will come here for the European Championships. She only learned from being the Olympics. In Tokyo she was maybe a bit too green; it may have been a bit too early for her, but today she felt really good!” Thieme said of his mare.

Kukuk said his stallion Mumbai came home fresh, and that their relationship has really grown thanks to the Tokyo experience. “I think going there made me and him, and brought us together. He is only nine years old, and he was probably a bit shy in himself there, but what is very good with him is that after coming back, it’s nearly like he’s thinking about it all, and when we see him now here he looks even better than before. He’s a wonderful horse; even when you have a mistake he thinks about it and wants to do it better next time,” Kukuk said today.

Meanwhile, the Swiss reflected on a great day when they were the only team to produce three clear rounds to leave them in pole position going into the final day of the team competition.

Fuchs’ tour of Frank Rothenberger’s 14-fence course was epic, Leone Jei’s extravagant jumping drawing gasps of delight from onlookers. “He has extreme potential and a huge gallop and is easy to ride. He has unlimited scope and he’s extremely good in his head – he really wants to jump!” said the man who at 29 years old is defending the individual European title he won two years ago with the great Clooney.

This result saw him take over the lead in the individual rankings, and it says something for Swiss supremacy when they hold three of the top-five individual placings at this stage of the competition, with Baumann and Guerdat currently sharing fourth behind Sweden’s Bengtsson in third and Germany’s Kukuk in second spot.

They may be in a strong position, but they are not getting too carried away. There’s more work to be done before those medals are presented.

“It’s still a long way to go; everything is still out there. The teams are quite close, but our horses are jumping good and we will give it a try tomorrow,” Guerdat said.

He has had Albfuehren’s Maddox since he was seven. “He’s a Swedish horse that Peder Fredricson used to ride. He’s a really nice horse and I always thought that one day he would do something big. He didn’t win much as an 8-year-old; he started a bit last year; he’s only ten and still has a lot to improve, but he’s powerful and has what it takes to jump big fences. Maybe he’s not quite ready yet to jump five big rounds but we will try,” he added.

The year 2021 has been a mixed bag for the London 2012 Olympic champion. “I’ve had great success and pleasure in my personal life; it’s been enjoyable every minute,” said the popular athlete whose daughter, Ella, was born in April. But as he pointed out, it has been a tough year from a sport point of view. In June he lost the mare he always called his “Queen,” Bianca, who died of a brain tumour.

“It was not the nicest time, but it’s one of those things that happen. I was on a little bit of a down after that. I won’t say it’s because of that, but sometimes things don’t go well and that’s the run I’ve been having at the moment. That’s why today was important – everything doesn’t feel as confident and smooth as normal, but I have to at least fight. That’s the one thing I have control over. To show the good spirit out there, I’ve got to fight even more than normally, but this is sport; it’s what I’m trying to do and I have my horse on my side and I hope together we can fight for the best result possible!”