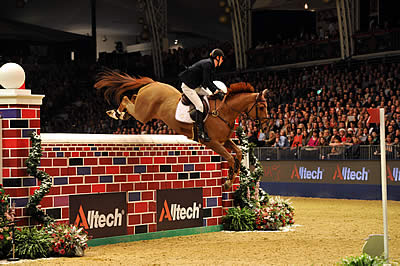 Two riders fought all the way to share a thrilling Alltech Puissance at Olympia, The London International Horse Show, after both their horses jumped superbly over five rounds.

Jos Verlooy from Belgium and Germany’s Hilmar Meyer were the only two to make it through to the fifth round and shared the spoils – which were presented by HRH The Duchess of Cornwall, paying her annual visit to Olympia – after soaring over the famous wall at 2.15m (7ft 1in).

Meyer first came to Olympia a couple of years ago as a groom; now, on his first visit as a competitor, he is celebrating winning one of the most prestigious classes. His horse, the 13-year-old Continuo by Contendro, is a puissance specialist and has taken many classes in Europe.

“I’m very proud of my horse,” said Meyer. “It’s an unbelievable feeling jumping that high, but only with the right horse. It’s been great to ride here at Olympia; it’s such a great atmosphere.”
Unusually, Verlooy, 20, was using the class as a warm-up for the Longines FEI World Cup qualifier on Sunshine, a nine-year-old chestnut gelding. “I think that jumping a puissance can work well as a warm-up before a really big class,” he explained. “It was really exciting. I couldn’t believe how easily my horse jumped.”

ROBERT WHITAKER TURNS UP THE HEAT

Earlier in the evening there was a British one-two-three in the Porsche Cayenne Challenge, a speed class. The third last rider, Robert Whitaker, made an audacious turn to the water tray on Usa Today to grab the spoils by 0.15sec from William Funnell (Billy Angelo) and Laura Renwick (Heliodor Hybris).

“I’ve been coming to Olympia since I was a kid, watching my father [John], so it’s always fantastic to win,” said Robert. “Usa is not actually that fast, but he definitely likes the atmosphere.”

Drawn near the end of the starting order, Whitaker had spotted an opportunity earlier during the round of another of the challengers.

“Jos Verlooy (BEL) almost made it but it didn’t quite come off,” said Robert. “When I jumped the fence before the turn, USA Today landed in a way that gave me enough space to get the tight right-handed turn in.”

Robert pointed out that winning at Olympia, The London International Horse Show is particularly special for the world’s top riders.

“Everyone wants to win here, regardless of whether they are British or foreign riders,” he said.

Italian rider Emanuele Gaudiano was the first rider to chalk up an Olympia winner when taking the opening Santa Stakes on Caspar.

In the Dodson & Horrell Top Score Extreme Carriage Driving competition, Australia’s Boyd Exell showed, yet again, why he is the current world horse four-in-hand champion, both indoors and out. His thundering round, in which he gave a dazzling performance of rein handling, through the course that featured two obstacles and a bridge, recorded a time some seven seconds faster than his fellow contestants.

Speaking after the competition, Exell remarked that his horses felt like ‘magic’ in his hands. “I had to constantly slow them down rather than urge them on,” he remarked. He was disappointed, though, to incur a five-second penalty when a ball fell. “It had felt like a clear round,” he said.

Today’s contest was a forerunner to the two qualifying legs of the FEI World Cup Driving, the first of which features tomorrow with the Final on Saturday evening. The Olympia crowd was treated to the thrilling spectacle of this competition – the finale of the afternoon performance – as each driver pushed their horses to their limits round the tight course. Exell’s closest challenger, Ijsbrand Chardon from the Netherlands – himself a previous World champion indoors and out, was the only competitor to drive clear. Seven seconds slower than Exell, however, meant the Australian claimed the crown by a less than two second margin. Jozsef Dobrovitz from Hungary, driving at Olympia for the first time, was third.