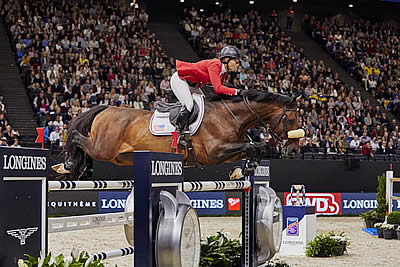 Beezie Madden secured her second Longines FEI Jumping World Cup™ victory in 2018 riding Breitling, and she goes for a hat-trick at next week’s 2019 Final in Gothenburg (SWE). (FEI/Liz Gregg)

She’s going for a hat-trick of titles and America’s 12th when the Longines FEI Jumping World Cup™ Final 2019 gets underway in Gothenburg (SWE) next week. However, US superstar Beezie Madden will be under no illusions about what lies ahead of her. She may have double Olympic gold, World Championship team and individual silver and two World Cup titles under her belt, but the world no. 8 rider knows that there is a host of European rivals determined to stand in her way. And amongst them is a rock-solid and on-form German contingent.

Although the USA held the advantage over the early years, Germany became the most dominant nation in the Jumping World Cup series in more recent times, with Daniel Deusser posting his country’s tenth victory in Lyon (FRA) in 2014. But McLain Ward put the USA on level pegging when coming out on top in 2017 and last season’s win by Madden pushed her country out in front. Deusser, however, has had a stormer of a season in the 2018/2019 Western European League qualifiers, with three sensational wins backed up by several other great performances to leave him with a massive 99 points at the head of the league table. He’s a force to be reckoned with right now.

And cementing the German strength, fellow-countryman Christian Ahlmann, champion with Taloubet in 2011, finished second in this series. He brings one of the most exciting horses you can expect to see next week, the gorgeous 10-year-old grey Clintrexo Z, who showed spectacular athleticism when clinching a last-to-go victory at Mechelen (BEL) in December. This stallion’s confidence, balance, and turning skills will play a big role as rideability, courage, and quick decision-making will be key to success over the courses designed by Spain’s Santiago Varela in the tight confines of the Scandinavium Arena. Rounding up the German contingent is 1993 champion, Ludger Beerbaum.

The host nation is also well-armed with reigning European champion Peder Fredricson, the talented Irma Karlson and Henrik von Eckermann all flying the flag. And Von Eckermann has a score to settle. He might have forced Madden into a jump-off for the title at last year’s Final in Paris (FRA) but for a last-minute mistake which dropped him to third. But he brings out the brilliant Toveks Mary Lou once again, and on current form they are a very significant threat.

The star-studded line-up includes so many of the top names, and it’s difficult to look past Switzerland’s Steve Guerdat and Martin Fuchs, but the Final is also about seeing new faces from far-flung places along with the developing younger generation.

Gothenburg is the end of a very long journey for South Africa’s Lisa Williams and her horse Campbell. They’ve experienced a series of incredible complications since leaving their home country to travel to the FEI World Equestrian Games™ in Tryon (USA) last year, but they overcame them all and deserve a very special welcome when they ride into the ring next week. They qualified for this Final two years ago, and Sweden is the end of the line before the 52-year-old rider heads back home.

America’s Eve Jobs (20) and Kelli Cruciotti (21) will be two of the youngest riders in action, and the five-strong US line-up is completed by Georgina Bloomberg and last year’s runner-up, Devin Ryan. Americans filled three of the top four places in 2018, so nobody is taking them for granted this time around and American ladies have an exceptional record.

Only five female athletes have taken the title in the history of this prestigious series that every rider wants to win, and they all have one thing in common. Melanie Smith (1983), Leslie Burr Lenehan (1986), and Katharine Burdsall (1987) all flew the American flag, while three-time winner Meredith Michaels-Beerbaum from Germany (2005, 2008, 2009) was born in Los Angeles, California. Madden became the fifth lady champion when pipping Switzerland’s Steve Guerdat in a thrilling jump-off back in 2013 and she will be flying the US flag with her 2018 winner, Breitling LS, when the action gets underway next week.

She’ll have to go like the wind in Thursday’s (4 April) first competition and then jump big and clean again on Friday (5 April) to qualify for Sunday’s (7 April) title-deciding showdown.