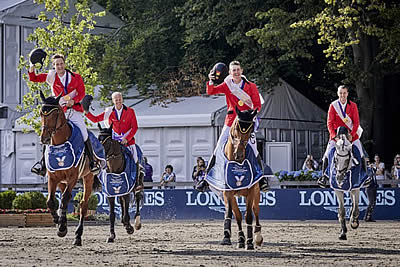 Belgium held on tight to the top of the leaderboard to win their first-ever team medals in the 62-year history of the FEI European Jumping Championships – and they were golden ones.

Otto Becker’s German side were firm favourites to take the title for the eighth time, but in the end, they had to settle for silver ahead of Great Britain in bronze. And the icing on the cake from a Belgian perspective was that they are now on the road to Tokyo 2020, because they bagged one of the three spots on offer to teams not already qualified thanks to superb performance from Pieter Devos, Jos Verlooy, Jerome Guery, and Gregory Wathelet. Britain and France bagged the remaining two qualifications.

It was edge-of-the-seat stuff to the very end, Wathelet aware that he could afford a fence down or a time fault when he was last man into the ring, but not both if his country was going to top the podium.

Belgium, Germany, and Great Britain were already in gold, silver, and bronze medal positions as the final day began. The British added eight faults to their scoreline when Ben Maher and Explosion led the way with a clear and both Holly Smith (Hearts Destiny) and Amanda Derbyshire (Luibanta BH) left just a single fence on the floor, Scott Brash (Hello M’Lady) providing an eight-fault discard this time around.

When Devos and his mare Claire Z were first out for Belgium and collected five faults when hitting the penultimate vertical and going over the time-allowed of 78 seconds their lead began to look a little shaky. But Verlooy and Igor kept a clean sheet and when Guery and Quel Homme de Hus collected just a single time fault then they began to look much more secure.

As Wathelet set off history was hanging in the balance, but he wasn’t going to let that get to him. “I like pressure!” he said after galloping through the timers with the scoreboard showing a nice big fat zero. In the final analysis his country grabbed the gold with a total of 12.07, Germany took silver medal spot on 16.22, and Great Britain finished in bronze with 21.41.

Victorious Chef d’Equipe, Peter Weinberg, said, “It’s unbelievable and I’m very, very proud of my team, four top riders with brilliant horses; they did a fantastic job and I’m very, very happy!” When asked why it has taken so long for Belgium to get on the European team podium, he replied with a laugh, “Maybe it’s because they didn’t have me as a trainer!”

All the Belgian team paid tribute to their back-up crew and the other Belgian riders, including Olivier Philippaerts and Niels Bruynseels, who have supported them every inch of the way this week.

“We’ve been working together for a couple of years now, and today we put everything together. We all think the same way and we are all good friends, and this is why we got the gold.” — Pieter Devos (Team Belgium)

Jerome Guery said, “Yesterday I was a little disappointed with my result – I had to be better today for my horse, and also for my team. We knew after my ride the we would get the silver but then Greg rode a clear and it was gold!” And like all the riders, he complimented the fantastic courses being presented by The Netherlands’ Louis Konickx this week.

“We’ve had three really different classes; the first day was a typical speed class, yesterday was a more delicate round, and today was much bigger. It’s been a really good job from the course design team,” he pointed out.

Germany’s Daniel Deusser reflected on how this team competition played itself out. “We started strong on the first day but lost it a little bit yesterday… it was a very exciting class today and the teams were close. In the end we are very happy with silver.”

All four Belgian team-members have made the cut into Sunday’s top-25 individual final, and Verlooy is lying a very close second to Britain’s Ben Maher at the head of affairs when the action gets underway after a rest day.