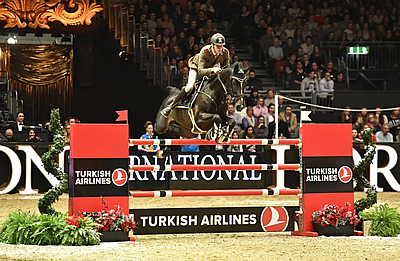 The pinnacle of the last day of Olympia, The Turkish Airlines Olympia Grand Prix, was won by Alberto Zorzi, defending his 2017 title to become a back-to-back winner of the prestigious class. Earlier in the day the Show Jumping competition saw Irishman Shane Breen take the title in The Christmas Masters. The final show jumping class of the Show, The Mistletoe Mini Stakes, was won by the speedy duo of Connie Mensley and Madonna.

Alberto Zorzi became the fifth rider in history to win The Turkish Airlines Olympia Grand Prix back-to-back when he produced an incredible burst of speed to outdo his four rivals in the jump-off and bring a brilliant five days of jumping to an enthralling close.

Last year, Zorzi, a member of the Italian army, also won on a mare (Contanga); this time it was the black 10-year-old Ulane de Coquerie. “It’s unbelievable! I am so lucky,” said Zorzi. “I know my horse is very fast, so I trust her and go with her. She’s one of the best I have ridden. I love this Show!”

Only four went through to the jump-off, and Portugal’s Rodrigo Giesteira Almeida riding GC Chopin’s Bushi made a feisty start with a clear in 28.69 seconds. However, he was overhauled by the stylish Dutchman Maikel van der Vleuten on Idi Utopia, who came home in 28.64.

Scott Brash was the sole British representative, riding a masterful clear round on the youngster Hello Jefferson, but a tight turn proved too ambitious for the nine-year-old and he refused.

Both Zorzi and van der Vleuten felt the Grand Prix track was harder than that for the previous day’s FEI World Cup™. “Alberto’s horse had a shorter stride than mine and could move up more quickly to the fences,” explained van der Vleuten, who ended up as Leading Rider of the Show. “But finishing second, and as Leading Rider of the show, is a great way for me to finish the year.”

Ireland’s Darragh Kenny and Olympia newcomer Doron Kuipers from the Netherlands were second and third in the final rider rankings with William Funnell best Briton in fourth.

Shane Breen Is the Master

Until this year, Shane Breen had never done a full week at Olympia. Now, he’s won his first rankings class and been crowned the victor in The Christmas Masters, a winner-takes-all knockout contest for the leading seven riders in the show.

The British trio of William Whitaker, John Whitaker, and William Funnell exited by the second round, as did Ireland’s Darragh Kenny. Then Dutchman Doron Kuipers, making his first visit to Olympia, hit a fence in the third and it was all down to Breen, riding Clyde VA, and Maikel van der Vleuten from the Netherlands, who took it to a jump-off against the clock in the fifth round for the jackpot of €9,500.

“I knew Maikel would be quicker [on Dana Blue], which is a more experienced horse than mine, so I had to hope he would have a fence down – and he obliged!”

Breen, a keen hunting man, said of his winning mount, Clyde VA: “I think a lot of this horse. He’s a little bit lazy to ride, but he’s going to be a good addition to Team Ireland.”

Earlier in the day, there was a timely birthday present for the popular Italian rider, Luca Maria Moneta, when a late dash on the 17-year-old Neptune Brecourt clinched the Turkish Airlines Speed Stakes from Robert Whitaker on Major Delacour.

Moneta, who is 51 and a strong advocate of working in partnership with the horse – many spectators will remember the way he fed his horse a carrot in the Puissance in 2013 (he still carries them in his pocket) – said: “Both my best horses are 17 years old and they spend a lot of time being horses rather than show jumpers – they go in the field every day at home.

“This horse enjoys competing so much that he would hate it if you left him behind – he finds it fun and easy. Sometimes when you get to the last fence in a speed class the horse will be hanging on the bit, but Neptune was very focussed today and our partnership work was rewarded.”

Scott Brash may be known by some as the cool ice man of Show Jumping, but it was an emotional evening at Olympia as he retired his brilliant mare Ursula Xll.

Ursula, owned by Lady Harris and Lady Kirkham, is 17 and has twice been the top ranked horse in FEI competition and a flagship for British breeding; she won the 2016 CP International at the CSIO Spruce Meadows ‘Masters’, Canada and was runner-up in the FEI Longines World Cup™ leg at Olympia in 2017.

“We have a great partnership,” said Brash. “She gives you some feeling in a big class and I know what she’s going to do. Eventually she wants to have a foal, but she’ll come home with me and I will keep riding for a bit because she’s very fit and needs to be worked.”

Brash’s career has already included an Olympic gold medal, being world number one and winning the million-dollar Rolex Grand Slam, but the 33-year-old Scot admits: “I live for those feelings. The Grand Slam was one of the best things in my life, as was winning an Olympic gold medal in my home country, but it only makes me hungrier. I will want to win the World Cup final and an individual gold medal – I’m very motivated.

“I’m my fiercest critic. I have been cross with myself when I’ve won, but I’ve also come out of the arena with two down and been quite happy with that. I’m most comfortable when I’m in the ring. It’s what I love doing.”

Return of the Natives

A striking Connemara stallion described “as an absolute treasure at home” was crowned Supreme Champion in the BSPS Ridden Mountain and Moorland Championship sponsored by LeMieux.

Sandra Burton and Joe Burke’s 10-year-old Banks Timber, third last year, was bred in Denmark by Peter Bank Mikkelson, bought as a yearling from sales in Galway, Ireland, by Mr Burke, who had flown over for the day at Olympia, and arrived as an unbroken six-year-old at Mrs Burton’s Connemara pony stud in Lancashire. Reserve Champion was Cadlanvalley Buzby, a Welsh Section B stallion by Russetwood Elation out of Stockham Domino, owned and bred by Hayley Grota and ridden by 13-year-old Liberty Grota in her first season with the pony.