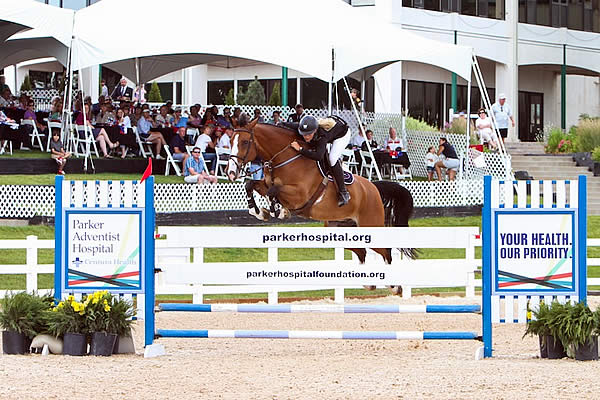 Parker, CO – July 20, 2013 – The crown jewel of the Summer in the Rockies six-week series, the $50,000 Parker Adventist Hospital Grand Prix, was held on Saturday afternoon. It was Military Day at the Colorado Horse Park, honoring and welcoming military and first responders to enjoy family activities and great show jumping.

Title sponsor Parker Adventist Hospital was on hand for helmet fittings and distribution of free riding helmets to children as part of their Equestrian Safety Program. The evening began with lead line featuring cute ponies and children all walking away with blue ribbons, followed by fast and feisty Jack Russell terriers who raced against each other to the delight of the crowd of spectators.

The first horse appeared promptly at 4 p.m. to tackle international course designer Danny Foster’s course, a big and winding course that tested the maintenance of pace around turns, lengthening in forward lines and shortening in tight combinations.

“When you have the series-ending class and there’s extra money, there are all these reasons why you can go to the next level of competition,” said Foster. “I think people love it because it makes the first round so much more exciting.”

It wasn’t until six rounds in that Kristen VanderVeen from St Charles, IL, produced the first clear round aboard Bull Run’s Eternal. Five rounds later, John Pearce and Forest View Farm’s Chianto were fault-free, followed by Madeline Thatcher aboard Pony Lane Farm’s Splendor, then, Caitlin Hope and Total Touch, owned by Kathleen Hope. Armando Hassey put in what appeared to be a beautiful faultless round, but ¼ second over the time allowed cost them one fault.

Several rounds later, Alex Granato and Gangsta put in a clear effort, followed by Karen Cudmore and Southern Pride, and finally John Pearce and Son of a Gun. Altogether, seven horse and rider combinations met Foster’s challenge and progressed to the jump-off round.

“I like when more important classes begin with a championship,” said Foster. “They’re not just flat out decided in the jump-off.  If you get to the jump-off, right away you should be assured of a nice position. It was an accomplishment to go clean in that quality of first round.”

VanderVeen was the first to return for the short course with Bull Run’s Eternal. She delivered a flawless, clean round and tripped the timer at 40.035. Next, Pearce and Chianto had two down but a very fast time of 36.85. Thatcher lost a stirrup when Splendor knocked down a rail in their jump-off round and performed the majority of the round without her stirrup. Hope and Total Touch had a rail then some trouble at an oxer near the in-gate, which landed them in seventh place.

Granato and Gangsta managed the double clear in a time of 41.170 putting him in second place. Then Cudmore and Southern Pride were clean within 41.318 placing them in third.

Last to go in the jump-off round, Pearce and Son of a Gun attempted to come in clean and best VanderVeen’s time, but the pair had a rail and with a time of 42.069 ended up in fourth place.

“I felt good going in – he felt great in the warm-up ring,” said VanderVeen. “We felt on our A-game, but I never like to over think it too much.”

“In the first round all the lines were little bit slow, except one random line, so the whole rhythm of the course was a bit slow,” she continued. “My horse has a big stride, so I was trying to change gears in my mind. I was thinking, ‘Rein it back in stay in control; don’t get over-excited.’ The triple walked really tight and tough to jump, especially because it came after the only forward line in the course. It walked a big five then, turn right in the corner and real tight to that triple. I wanted to hit that five-stride and slow down into the triple. The vertical coming in was considerably smaller than B, which for some horses is hard to judge.”

“It is the end of three weeks so Gangsta is a little tired, but he shows it more as getting more tense to ride,” said Granato. “My plan for the first round was to hold it together and ride the best plan for him today – not how I walked. So I talked with John McConnell and Teri Knowlton who were helping me on the ground. We made a good plan for the first round.”

“I have known Danny Foster for years, so I knew exactly what to expect from his course,” said Cudmore.

“It is always hard to go first in the jump-off,” said VanderVeen. “I was going to lay it down and let them chase me. He’s got a really big stride, my plan was to start with that really big canter, be tidy but stay on my rhythm. You know, John Pearce can turn tighter than I can and there are other riders that can sneak in tighter than I can, but our strength is that he can jump off of a big gallop. That was my strategy.”

“My plan for the jump-off was still to hold it together, stick to the plan but be efficient and leave the rails up,” said Granato.  “Today it paid off.”

“What a great circuit it has been,” said VanderVeen. “We had a great welcome our first class, then Chelsea (VanderVeen’s client, Babcock) really killed it the first three weeks especially, she won almost every junior class, and the classics. Carolyn was champion last week in the low adults. So that was really encouraging, working with the whole team together, things were gelling and once you get that momentum going you can ride on it a little bit.”

“This is the threepeat,” said Keith VanderVeen, Kristen VanderVeen’s proud father. “This is the third year in a row she’s won the $50,000 Grand Prix. What makes me proudest is that every year the horse she won on got sold and she had to come with a new horse. And that’s not easy to do because you don’t have time to build a partnership.  We’ve had this horse for little under a year. She’s getting consistently better as a rider and she can ride a lot of different kinds of horses and get the best out of them. She’s worked very hard.”

“We came here when they were juniors, and now it is not the same show,” said Keith VanderVeen.  “Pat Boyle, in my opinion, has done a fantastic job teaming up with Helen (Krieble) to create a venue that’s  in a whole other league.”

“It is nice to see what Helen and Pat and Showplace Productions are doing,” said Granato. “We had a great circuit and it was a lot of fun. It is nice to be home and it is always good with Pat running a show. He does a good job.”

“The footing has also made a huge difference,” Keith VanderVeen continued. I want to give a shout out to the Coors Family for helping to make that happen. Now good horses can come to Colorado.”