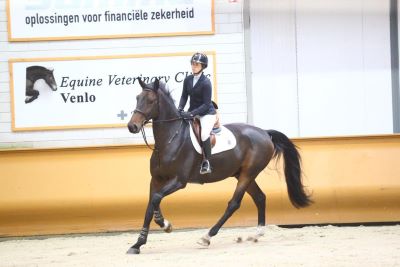 When Emma Butchard met Itran in 2019, she took on a new challenge. At just three years old, Itran was tall, lanky, and had a limited education. Never before had she added such a young horse to her string.

It was the first time I had a horse where I was starting from scratch,” she recalled. “Taking him to his first horse show and seeing him now as a 5-year-old with so much promise — it’s been very rewarding.”

Butchard, who operates her family’s Leatherstocking Farm alongside Andre Nagata’s Nagata Sport Horses in Panningen, The Netherlands, now finds herself surrounded by a classy group of well-bred 5-year-olds. Itran, however, remains a standout. Amidst Holland’s multiple quarantines due to the ongoing COVID-19 pandemic, Itran made his horse show debut in 2020 and is being aimed for a debut in the 5-year-old division in 2021. Butchard and Nagata agree: the brave, scopey gelding shows promise for top sport.

“We can trust him a lot,” Nagata said. “He’s brave and easy. He’s not the type where we have to do a lot of jumping and shows with him. He has the talent and all the tools that he needs to succeed.”

By Indoctro out of a Balou mare, Itran arrived late in his 3-year-old year from Andre’s brother Gabriel, who scouted and purchased the gelding from an online sales ad in England. The bay certainly had presence; he was tall with long legs and a big, kind eye. Butchard and Nagata immediately recognized the need to take their time with the horse’s development, given his size. They put a focus, instead, on ground work.

“Andre would have Itran work on a lunge line and in a circle, and he’d add an umbrella on the ground and have him walk over a tarp to have him practice braveness, bending, and learning the shape of his body,” Butchard explained.

Fitness was also paramount. Butchard and Itran spent the warmer months building endurance in their facility’s expansive grass field. When it came to jumping, much of it was done at the trot, with Butchard recreating courses in the form of ground poles. While building fitness, she inserted periodic tests for bravery. She got hints of her mount’s unflappable demeanor when he failed to bat an eye at a water tray or when taking on the area’s trail system.

A new venue failed to faze him, either. Itran’s first trip off property in September 2020 was taken completely in stride. So, too, was a second venture away from home, where Itran jumped his first full course.

“He just walked into the ring and went to the whole course, like it was nothing for him,” Butchard recalled. “That’s when we thought, ‘This horse is going to do something.'”

While horse shows were formally on pause in October, Peelbergen opened its doors for Training CSI events, where Itran made his show debut with Butchard, jumping .70m-.80m. Butchard could hardly hide the smile from her face as the gelding professionally marched around the venue’s bold indoor arena.

“He showed a lot of balance and was careful with an easy, big stride. Everything that I needed, he had,” Butchard said.

Since Itran’s arrival, an impressive group of prospects have arrived through Nagata Sport Horses’ doors, including horses by Douglas VDL, Cornet Obolensky, and Courtello Z. With a bourgeoning development and sales business, Butchard is now putting the lessons she’s learned with Itran to use on a daily basis, with a variety of young mounts.

“I’ve learned that every horse goes their own way, and you have to make a plan that’s specific to their needs,” she said. “I’ve also learned to trust them much more and to see how they are in the beginning and know that they’re going to get much better [in their technique] as they learn and grow.

“For us, we’re going slow with them and doing the whole process,” she continued. “Hopefully, this year we can get out and compete a little bit more, to get the horses some good miles and get their names out there. It’s nice to have young ones coming in, watching them grow and seeing them go on to succeed with someone else.”