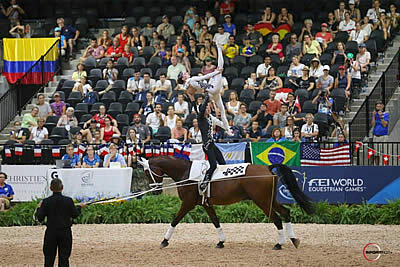 The world’s No.1 pair from Italy set all their heart in the Freestyle, earning 9.027 with high 9s for artistic value as well as the technical execution.

Lupacchini had set his own ambitions as an individual vaulter aside for the sake of the pair’s competition and it was worth it.

“We are really happy because we did what we prepared in training over this year,” he said.

In the end, it was the horse’s scores and a little wobble that put the Austrian title holders from WEG 2014 on Silver. Jasmin Lindner and Lukas Wacha have trained together for eight years and won the first ever Pas de Deux World Championship title in 2012. Understandably they were quite disappointed after they lost first place by 0.014 point, finishing on 9.013.

“We had invested a lot and then a small mistake in the beginning of the Freestyle made all the difference,” said the 31-year-old physiotherapist, Wacha.

Germany’s Janika Derks and Johannes Kay interpreted the emotions of energy to score 8.872.

“We showed the utmost what we can do and are happy with a medal. Competition was very tight and it was a great final.”

Torben Jacobs and partner Theresa-Sophie Bresch (GER), finishing fourth with a Spanish medley, and summed it up. “This must have been the strongest pairs’ competition ever. So many 8’s and 9’s – and to be here at WEG will be in our hearts forever.”

Derks is known for her power and strength in Vaulting, but could not quite stand her dismount from Carousso Hit. Despite this mishap her technical was the best of the day.

“The dismount was expensive. Touching the ground is one point off (from the performance score). But the others have to get everything right as well,” said Derks.

World cup winner Boe kept her lead from the previous Compulsory and Freestyle even though strong Janika Derks topped her in the technical movements.

Italy’s defending WEG-silver medalist Anna Cavallaro injured a knee when dismounting, and although she is still ranked fifth overall, it is doubtful that she will participate in the final competition on Saturday.

France’s Lambert Leclezio put his best foot forward showing the top technical program of the day with fluid sequences between the prescribed movements, earning 8.443 points, placing him in front of Colombia’s 18-year-old Juan Martin Clavijo (8.166) and Jannis Drewell (GER) on 8.166.

“I just wanted to go out on the good vibes after the Freestyle yesterday, which was not good at all,” said 21-year-old Leclezio who had moved from the island of Mauritius to France for better Vaulting opportunities.

At his second WEG, the top technical score pushed Leclezio in the overall lead before the final Freestyle for the medals on Saturday.

Germany’s Jannik Heiland and Jannis Drewell are in second and third. The third German Thomas Brüsewitz, fourth at WEG 2014 and vaulting as the Prince of Bel Air in the technical, lost his lead and now ranks fourth.

“It is not all lost yet,” said Brüsewitz.

Team Germany leads the Squad standings on 8.405 after two rounds before going into the final Freestyle for the medals to be hosted on Saturday. The defending title holder’s advantage from Team Norka is the thinnest possible, as they are only 0.001 points ahead of Team Luetisburg for Switzerland. The silver medalists from WEG 2014 are on 8.404.

Austria (7.977) has more to catch up on if they want to improve their medal with Italy breathing down their necks (7.846), and it will be a hotly contested lunging circle at TIEC’s Indoor Arena on Saturday, starting at 12:00 p.m. EST.

Great Britain’s Sophie Wells led from the front as the race for team medals took center-stage in Adequan® Para-Dressage on Thursday.

Britain’s Para-Dressage team boasts one of the longest unbeaten records in sport, having won every Team Gold medal available at World, Paralympic and European levels.

Wells ensured a strong start for them at Tryon Stadium after posting a score of 77.233% to top Grade V by an emphatic margin from the Netherlands’ Frank Hosmar, riding Alphaville N.O.P.

Wells’ teammate Sir Lee Pearson, meanwhile, put behind his retirement in the Grade II Individual championship with Styletta on Tuesday to finish third in his section and ensure Britain were well-placed overnight, with two more riders – Natasha Baker and Erin Orford – set to complete their tests on Friday.

France currently leads the way, but all four team riders have performed their tests, with the in-form Netherlands second and Japan third. Strongly-fancied trio Britain, Denmark, and Brazil all have half their team line-ups still to ride, while the Netherlands are also strong Gold medal contenders.

“I knew I needed to up my game from the other day for the team,” Wells said. “I had a look at my test with my coaches and looked at different areas. You learn to deal with the pressure and I just focused on what I needed to do. All the other nations are getting so much stronger and the horsepower is incredible in the sport. We want to retain our title, but we can only do the best that we can do.”

For Pearson, who needs one medal in Tryon to become the most decorated Para-Dressage rider in FEI World Equestrian Games™ history, it was a case of him showcasing all his ability and experience to score 71.606% in a section that saw Individual Gold medallist Stinna Tange Kaastrup again come out on top.

“I was not worried about the placing today,” Pearson said. “I rode calmly and passionately in there, and said thank you to her (Styletta) on every transition. She has been brilliant here, with the environment, with the arenas. I thought she would be petrified, but she hasn’t been, and I do believe that she will be a fantastic championship horse for the future.”

Kaastrup, meanwhile, continued her impressive championship on Horsebo Smarties, recording a winning margin of almost two per cent from the Netherlands’ Nicole den Dulk, who finished second on Wallace N.O.P.

“Everything that we talked about that I was supposed to do in there, we did, and I am super proud about that,” Kaastrup said. “The horse is amazing and I learn a lot from him. I am feeling really good, especially with the score I delivered.”

Grade IV riders closed the opening day of team competition – medals will be awarded following Grade III and Grade I on Friday – and it was Individual Gold medalist Sanne Voets who again delivered the goods with Demantur N.O.P.

“He was amazing. He was so sharp, willing and obedient, and I think this is what makes it so beautiful when two becomes one – when a horse and you are in perfect harmony,” Voets said.

“The pressure is on the British now, and we like that. We came here with one aim, and that was to win a team medal to qualify directly for Tokyo.”