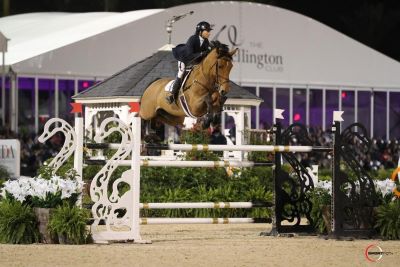 Wellington, FL – January 22, 2022 – While the international competition during this week of the 2022 Winter Equestrian Festival (WEF) has been held at Equestrian Village, all eyes were on the International Arena tonight at the Palm Beach International Equestrian Center in Wellington, FL for the $50,000 Marshall & Sterling/Great American Insurance Group National Grand Prix, part of the exciting “Saturday Night Lights” series. Laura Chapot (USA) delivered a thrilling performance as she and Chandon Blue raced through the timers for the win.

Forty-five entries contested the grand prix track set by Nick Granat (USA) with 11 combinations jumping clear and were through to the jump-off.

First in the ring for the jump-off was Grand Prix Qualifier winner, Cathleen Driscoll (USA) aboard her winning mount Flotylla, owned by Don Stewart. Driscoll duplicated her first-round clear performance, laying down a quick, clean effort in 37.07 seconds over the shortened course, which would hold up for fourth place.

A couple horses later, it was Nick Dello Joio (USA) and The Berry Group’s Cornet’s Cambridge that set the new time to beat at 36.33 seconds. That would ultimately be good enough for a third-place finish.

Dello Joio’s time was quickly slashed as next in was Irish Olympian Shane Sweetnam who finished the short course in 35.728 seconds with James Kann Cruz, owned by Gizmo Partners LLC. However, Sweetnam would have to settle for second place.

After watching their new target in Sweetnam and James Kann Cruz, Chapot and Chandon Blue went pedal to the metal, finishing in 34.485 seconds for the win.

Adrienne Sternlicht Leaves It All on the Field for 1.50m Victory

The $37,000 CaptiveOne Advisors 1.50m Championship Jumper Classic started an action-packed day of competition on the Derby Field at Equestrian Village with 50 horse-and-rider combinations contesting Oscar Soberon’s (USA) educated first track. More than 13 nations were represented in the class and seven of those countries were represented in the returning jump-off field which consisted of 18 fault-free competitors.

Ireland’s Shane Sweetnam held the leading time for a majority of the shortened track until FEI World Equestrian Games Tryon 2018 U.S. team gold medalist Adrienne Sternlicht found an even faster pace. The young professional proved ready for an impressive season as she captured the first win of the day aboard Lafayette Van Overis.

Sternlicht laid it all on the line with the 11-year-old BWP gelding (Kashmir Van Schuttershof x Houdini Van Overis) with a variety of long gallops and tight turns to shave an entire three seconds off of Sweetnam’s time and blaze through the timers in 42.51 seconds.