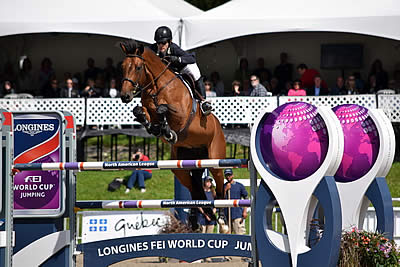 It was a day of firsts for Canadian Isabelle Lapierre, as the 38 year old rode her own Cescha M to her first World Cup qualifier victory and her mount’s World Cup qualifier debut at the opening leg of the 2017/2018 season of the Longines FEI World Cup™ Jumping North American League at Bromont (CAN).

In front of a hometown crowd, the Quebec native vanquished a six horse jump off. Jennifer Serek and Wicked took runner-up honors, and Heather Caristo-Williams and Qui Vive des Songes Z were third.

“She had a very good year, and she’s always trying to win. We built her up, and she’s just improving every year.” — Isabelle Lapierre (CAN)

Third to return over the shortened track designed by Belgium’s Luc Musette, Lapierre took over the lead briefly set by Serek, crossing the timers in 43.39 seconds, and held through to the end, as neither Ali Ramsay (CAN) nor Charlie Jacobs (USA), riding his 2017 Longines FEI World Cup™ Jumping Final partner Cassinja S, could jump cleanly or catch her time.

“Every time I jump here, I feel the crowd is jumping with me,” she added. “I think that’s why I went faster than Jen. The crowd was pushing me. I had an advantage.”

Isabelle Lapierre (CAN) – 1st: “I think this event was very amazing. They gave everything for horse and rider to have perfect conditions. They work hard, and the course designer was fantastic and the crowd amazing.”

“The whole year, we planned the shows where we wanted to be ready for here to see what she would do. Now, we have to think differently, because we know she can do that next step. Now, the plan will be built around doing the next step.”

Jennifer Serek (CAN) – 2nd: “This is the first World Cup Qualifier [Wicked] has ever done. I knew there were fast riders behind me, and I gave it my best shot, but I just missed out a little bit.”