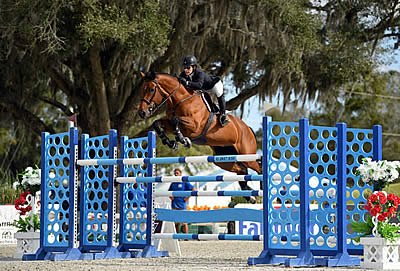 Ocala, FL (February 14, 2017): Week IV at HITS Post Time Farm included plenty of excitement and riders and horses of all ages, levels and states gathered to compete. The week culminated with the $50,000 HITS Grand Prix on Sunday.

Lapierre and Cesha M returned to stake claim to their title in a lightning-fast jump-off round, where they took the top spot on the leaderboard with a three-second lead. The pair was third in the order of the nine-horse jump-off, and their fault-free time of 40.763 held up through the rest of the field.

Many of the contenders in Sunday’s Grand Prix have been competing against each other for the entirety of the Ocala Winter Circuit, and the order of go was stacked with talent – it was a class of veteran Grand Prix riders no doubt, with some fresh faces in the top 12 as well.

Scott Keach was the seventh in the order to challenge the abbreviated course piloting Chicco W, owned by Edith Rameika. The Australian equestrian and his mount sped through the course, stopping the clock in 43.065 for the eventual second-place finish.

The last contestant in the jump-off was Kim Farlinger aboard Caprice Van De Brouwershoeve, owned by Kim Farlinger Stables, Ltd. They chased Lapierre’s leading time and zoomed through the course, taking each fence by storm and leaving the rails up. They finished in 43.074, only one-hundredth of a second behind Keach’s round, settling them into third place.

Devin Ryan took home the fourth place prize with Cooper as the quickest four-fault jump-off round in 39.122. Rounding out the top five was Mattias Tromp piloting Avon, owned by Swede Ventures, LLC. They too would be foiled by a single rail to finish the course with four faults in 40.497.

The twenty-year-old equestrian took home the prestigious placings in contention for the win among a field of seasoned Grand Prix riders, including Aaron Vale, Tracy Fenney and many more. Not to squander Waters’ fire, the young talent has seen the victory circle in many Grand Prix at HITS Ocala and HITS Saugerties, including a blue-ribbon in the $250,000 Jr/A-O Jumper Classic at the HITS Championship in 2015.

Waters took home the first $25,000 SmartPak Grand Prix win this year during Week I at HITS Ocala, and there seems to be no sign of slowing her down. Week IV’s victory came aboard Dorella, owned by Seth Vallhonrat. The third-place prize was with Qurint, owned by Chuck and Dana Waters.

In a four-horse jump-off, there were no clear rounds to be seen. Waters would have the only round with all of the rails intact with two time faults, clocking in with a time of 46.560.

Second-place Devin Ryan and Cooper were the quickest of the four-fault rides with a time of 37.718. Following Ryan in the placings was Waters’ and Qurint. They too would finish with only one rail in a time of 40.029.

Scott Keach was the final rider to place of the jump-off rounds, in fourth, with Chicco W, owned by Edith Rameika. Rounding out the top five was Lisa Goldman riding Sovereign, owned by Barbara Disko. They were the quickest of the four-faulters in the first round to secure fifth place.

Junior and Amateur riders were able to show in the big Ocala Horse Properties Stadium at HITS Post Time Farm for the $1,500 Platinum Performance Hunter Prix during Week IV of the Ocala Winter Circuit.

Holly French would be the rider to beat aboard Chestnut Hill, owned by Marissa Dolan. The two captured the highest scores in both rounds, a consistent 82 for a grand total of 164 and the winning title.

Second in the ribbons went to Leigh Gallagher riding Eternity, owned by Tibri, LLC. They were awarded a first-round score of 81, followed by an 80 in the second round to total 161.

MacKensie Bowles and Bittersweet Symphony were third among their peers, garnering an 80.5 in the first round, combined with their second-round score of 77 for a total of 157.5.

Rounding out the top five was Rachel Griffin and Jasmin De Bornival 2, owned by Nelson Pessoa. The pair was awarded a score of 77 in the first round and a score of 79 in the second round.