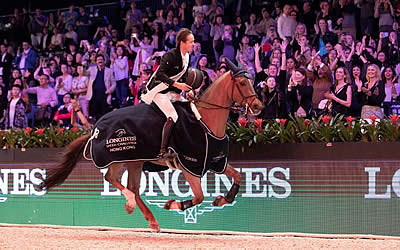 Bertram Allen and Christy JNR scorched the sand on his way to winning the Longines Speed Challenge on Saturday night, making it a second victory in the ‘fastest competition in the world” for the Irishman and sending the Hong Kong fans delirious.

Didn’t Allen just love it, too, breaking into a beaming smile after setting a time of 60.47 that proved far too quick – and too good. Behind him came France’s Patrice “King of Hong Kong” Delaveau and Vestale de Mazure*HDC (62.88), while fellow Frenchman Kevin Staut, winner of the Speed Challenge in Paris, and Ayade de Septon*HDC were third (62.94).

“I like to smile when I ride well,” said Allen. ‘I’m delighted and my horse ran superbly. The people here in Hong Kong really love it. They really enjoy their time and watching the horses. I love it.”

Among the many highlights of the weekend so far has been the talent shown by Asia’s rising generation of equestrian stars and they were out in force in the Hong Kong Jockey Club Asian Junior Challenge.

For the first time in the Longines Masters of Hong Kong, a competition over 1m for Asian riders aged under 18, from 4 different Asian nations, gave these emerging talents a chance to compete on the same stage as the greats of the sport.  Indonesia’s Muhammad Akbar Kurniawan rode Easyphighter Dei Folletti to victory and said the experience was a “thrill.”

“I feel great because this is my first time in such an incredible event like the Longines Masters of Hong Kong,” he said. “I hope I can use this experience and go on to the Olympics. I have been watching the stars and it feels great.”

The action on the main arena had begun early afternoon with four riders sharing the prize after a Masters Power Maserati Trophy Six Bar event that had seen the height reach to an astonishing 2.02m.

Again, an Asian rider was to the fore. China’s Ella Wang Yunjing on Aken Utopia joined Great Britain’s Laura Renwick on Top Dollar VI, Pilar Lucrecia Cordon of Spain on Trix Trax, and Irishman Allen on Izzy by Picobello in walking away the winners after failing on the monstrous fence but all clearing 1.92m.

The 21-year-old Chinese rider was still buzzing long after the event had ended, and showed herself to be another Asian star on the rise –and showing the ease with the big occasion of a veteran, in front of an enthusiastic crowd.

“It’s a really good day. I am very happy. It’s my first time doing a Six Bar, and my first time competing in Hong Kong and I was actually pretty nervous but [Aken Utopia] made it amazing,” said Wang.

It wasn’t just the more seasoned stars of equestrian sports who shared the spotlight on Saturday. A mini version of the Longines Speed Challenge was held in the afternoon – incorporating the talents of those kids involved in the 1st Asian Hobby Horse Competition, who tested their speed – and skill – across a specially designed course.

Part of the sales of Hobby Horse sticks has been channeled to the Save the Children Hong Kong, one of a number of fundraising efforts for the charity staged on Saturday and right across the Longines Masters of Hong Kong weekend thanks to the support of EEM.

What a day it was, and as night descended on AsiaWorld-Expo, DJ sets by Jeremie Charlier and then Henri PFR kept everyone moving – and cheering for more.