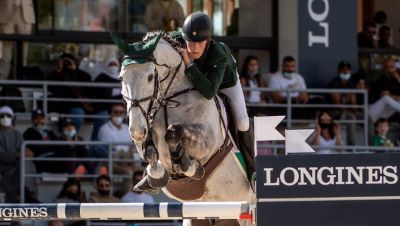 Team Ireland came out on top in the first clash of the 10-leg Longines FEI Jumping Nations Cup™ 2022 series at Abu Dhabi in the United Arab Emirates. But the hosts chased them every inch of the way to finish a close second ahead of Great Britain in third place.

As Irish Chef d’Equipe, Michael Blake, said afterwards the competition turned into “a two-horse race” when only a single fence separated his side, leading on a zero score at the halfway stage, from the home team who were carrying just four faults going into round two.

There was no room for error in the closing stages and, as Blake added, “The UAE really kept the pressure on us. I wouldn’t have dreamt this morning that it would take six clear rounds to win it,” Blake added.

For the UAE, their result easily secured one of the two places at the Longines FEI Jumping Nations Cup™ Final 2022 on offer to teams from the Middle East at this leg, the other going to Saudi Arabia who finished fifth.

The three-member Syrian side dropped out of contention when Ahmad Saber Hamcho retired in the first round, leaving six countries to battle it out in the closing stages in which Team Jordan just missed out on a Middle East qualifying slot when finishing sixth.

When the Irish reopened with a clear from Shane Breen and Z7 Ipswich and then youngest team-member 20-year-old Jack Ryan completed a double-clear with BBS McGregor, it was always looking good for the team in green.

However, as Blake had commented during the halfway break, there was no room for complacency, because the UAE really meant business. Like Shane Breen, host-team pathfinder Abdullah Mohammed Al Marri had picked up four faults in the opening round with Sama Dubai, but second time out they made no mistake. So when his compatriot Hamad Ali Al Kirbi was double-clear with the handsome grey Quel Cadans Z, then there was still only that one fence between the two sides.

Then Hamad Ali’s 21-year-old son, Ali Hamad Al Kirbi, piled on the pressure with an equally impressive tour of Alan Wade’s 12-fence track partnering the 13-year-old mare Dalida van de Zuuthoeve, so now the ball was back in the Irish court.

However, third-line Irishman, David Simpson, wrapped it up with his second cool clear of the day from the 12-year-old Foudre F. On a zero scoreline his team could not now be beaten, and Irish team anchor Trevor Breen’s single error with Highland President cost him only a share of the €50,000 going to the five partnerships who posted double-clears – Ryan, Simpson, Hamad Al Kirbi, Great Britain’s Donald Whitaker (Di Caprio), and Germany’s David Will (Babalou HD).

The final scoreline showed Ireland on zero, UAE on four faults in second place, and Great Britain’s Whitaker, William Funnell (Equine America Billy Diamo), and Georgia Tame (Z7 Ascot) in third on 17. Germany finished fourth on 34 faults, Saudi Arabia in fifth on 48, and the Jordanian team were sixth with a final tally of 50 faults.

The Irish always looked strong after wins for brothers Shane and Trevor Breen in the 5* and 2* Grand Prix classes at the fixture earlier in the week, so Chef d’Equipe Blake was feeling confident.

“We competed here four times and had three second-place finishes, but I felt this competition was ours to lose today and that we were the best team here, although I didn’t see the UAE coming as strong as they did – it just shows how showjumping is developing in this region!” he said.

He was delighted with the performances of all his team members, and was particularly pleased with the maturity shown by Jack Ryan who was competing in only his second senior Nations Cup. “He was on the winning team in Vilamoura (POR) last year, so he’s now made it two wins out of two – that’s impressive,” Blake said. He’s had a long association with the young man who hails from Inistioge in County Kilkenny, Ireland. “I was at my first Championship with Jack when he was just 11 years old competing in Children on Horses, and it’s extra special that he is riding a home-bred horse here today,” Blake pointed out.

BBS McGregor is a horse with a story, having recovered from a serious injury early in his life. “We bred him ourselves and as a yearling he got very sick because we think he was kicked in the head by another horse when out in the field. He fell apart physically and we couldn’t figure out what was wrong with him – he was just fading away. But he had a lump on his nose and when it was x-rayed it seems that a tooth went up through the roof of his mouth when he was kicked and he couldn’t eat because of the pain. He’s so much better now and it’s great to see him doing so well and enjoying himself in the ring,” Ryan explained.

He said he felt “confident but nervous” about competing at 5* level with such an experienced team, “but they helped me a lot.” He relished the competitiveness of this clash of nations. “Fair play to the UAE – they really put it up to us all the way,” he added.

Meanwhile, the UAE’s Abdullah Mohammed Al Marri was filled with pride for his country’s result. “I think our best score here before was 17 faults, so today’s result was really great!” he said. “We are aiming two teams for events this year – one for the Asian Games and one for the Longines Final, and of course today’s competition is also a qualifier for the World Championships, so it has been a great experience for all of us.”

Blake meanwhile is turning his attention to selection for the next leg of the Longines FEI Jumping Nations Cup™ 2022 series which will take place at Coapexpan, Mexico in March, but now it’s about celebrating his country’s first big team victory of 2022. “It’s a really great start to the year,” said the happy Irish team manager.