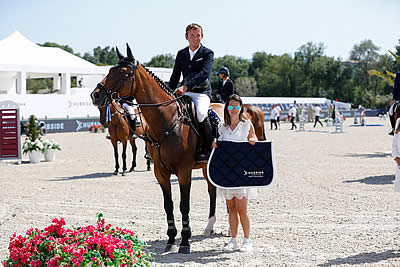 In the major event of the CSI 4 * of the HUBSIDE JUMPING of Grimaud, the Irishman Bertram Allen won after a jump-off at sixteen. Associated with the nine-year-old gelding Lafayette Van Overis, he is ahead of the Tricolores Nicolas Delmotte on Urvoso du Roch, and Pénélope Leprévost on Varennes du Breuil.

“It was an event with many very serious competitors, but we expect nothing less on the HUBSIDE JUMPING. The level is exceptional! We were seventeen couples qualified for the jump-off, and in view of the opponents, I knew we were going to have to go very very fast. We didn’t see any options that such and such would have taken: everything was in the natural speed of the horses and in the turns. I’m lucky: Lafayette Van Overis is particularly successful at this type of course. It doesn’t have a very large amplitude and I can hardly play with strides. The idea was to give everything and not waste time anywhere, a victory in such an event conditions for the Grand Prix. I will race it with a new horse which my brother rode before and which I will launch on this level: Dancing Queen Z. We will see how it behaves, which I found very long, was a rather nice moment for the horses: they were much more relaxed, even if we continued the work. For Grand Prix horses, it was simply a question of keeping them in shape and of maintaining their morale. For the youngest, six and seven-year-old horses, it was cool to be able to give them more time. But of course, it’s even cooler to find your way back to the competition.”