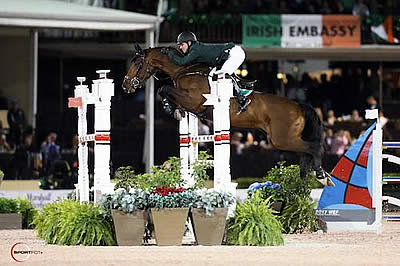 Friday’s Nations’ Cup consisted of two rounds shown over a course set by Ken Krome (USA). Teams of four represented the nations of Great Britain, Canada, Ireland, USA, Brazil, Argentina, and Venezuela competing in that order, followed by a team of three for El Salvador. After the first round, each team dropped their highest score. In the second round, the top six teams returned in order of highest to lowest total faults. The winner was determined by the lowest total of each team’s top three riders from each round.

Ireland finished round one tied for first place with Brazil on a score of zero. They then completed round two with four faults to take the win. Brazil moved into third place with 16 faults in round two. USA carried five faults from round one, and added eight in round two to secure second place on a 13-point total.

“I am a very proud Irishman. I am absolutely delighted,” said Blake, who also led the team to victory in Ocala two weeks ago. “We came here to win, and we went to Ocala to win. It is very easy to win with these guys because they are really good. Basically, if you have a bit of a plan and tell them in time where they are going, they are going to turn up. That is what they did on both occasions. People asked why I changed the winning team from Ocala (switching out Kevin Babington and Richie Moloney). I changed because I was looking at Paul and Conor, and I think their form is fantastic. I did not think they were quite ready in time for Ocala, but I knew they would be ready now, and they were fantastic.”

Sweetnam was the team’s first rider in each round on Friday night, earning the drop score of one time fault in round one, and four faults in round two, aboard Chaqui Z. He also rode the 11-year-old Zangersheide stallion (Chacco-Blue x Quinar Z) to victory in Ocala.

Friday night was Sweetnam’s tenth straight year competing on the Irish team in Nations’ Cup at WEF, and he spoke of Blake’s strategy for the team.

“Michael made a good plan and talked to all of the riders that were here in Wellington,” Sweetnam stated. “Obviously Cian and I were lucky enough to be on both teams that won, but Kevin and Richie were also here in the practice ring tonight helping out. The team spirit is fantastic. I have to give it to Michael; it is just amazing.”

O’Shea jumped double clear on Friday night with Skara Glen’s Machu Picchu, a ten-year-old Dutch Warmblood gelding (Silverstone x Matterhorn), and was happy with his first time on the team in Wellington.

“Nothing really fazes him, so I was not worried,” O’Shea said of his mount. “He has such a good mind. He is a very straightforward horse, very easy, and very adjustable.”

Swail put in a faultless first round and dropped one rail in round two with the 11-year-old Mexican Sport Horse stallion Rubens LS La Silla (Rebozo LS La Silla x Cash). He remarked, “The horse jumped very well tonight. He is a new horse to me this year. He is a wonderful horse and a great prospect for the future, and for the Irish team. Ireland has won here now three times, and thankfully I have been on all three teams. It has been a good record for me. We all mucked in, and dug in the trenches there, and I think we all did a great job tonight.”

“He had a rest since Ocala,” the rider noted. “Obviously it is a very different atmosphere here. Ocala was very warm, and it was during the day. I found this a little bit harder because the horse was lit up and on his toes, especially coming down the last line. I had to use all my strength to pull him off the combination, but he is very careful. He knows where his legs are, and he knows to get them out of the way, so I am very happy. It is great to win, and it was a fantastic team effort.”

Tyree jumped double clear in her first-ever senior Nations’ Cup appearance for USA and commented on a great night as well.

“I’m thrilled with how my horse went,” she stated. “He has such a great character and such a great mind. I knew once I went in the ring that everything would be okay. I jumped the first jump, and it felt like every other class that I have done so far down here. I could not be happier.”

Ward got a win earlier in the day riding Sagamore Farm’s Calvados in the $6,000 Illustrated Properties 1.40m Speed Challenge.

After winning two over fences classes and the under saddle, Gavin Moylan of Middleburg, VA and String of Pearls were named champion of the Young Hunter 3’6″ division. The pair also earned second and third place ribbons over fences. String of Pearls is owned by Priscilla Denegre, who is the mother of Moylan’s wife, Alden Moylan. Denegre has previously shown the mare in the Adult hunters.

Of the 2010 Hanoverian by Clinton I, Moylan said, “She’s a mare that I found in Germany as a four-year-old with super breeding. I think it took us about two and a half seconds to decide to buy her when we first saw her. She’s the whole package: a good mover, a really great jumper, and has such a quality mind.”

Moylan started showing String of Pearls at WEF in 2015 and has spent the past two years competing her in the Baby Green and Pre-Green hunter divisions.

“Her owner is not able to come down this season, so I have the ride on her this winter,” Moylan explained. “We decided to move her up to the 3’6″ and now the Young Hunters are being offered, which is a great division for her to show in.”

The pair has found much success in the Young Hunter 3’6″ division, winning the championship at WEF during weeks three and five as well.

Moylan, who spends the rest of year in Middleburg, VA, has been attending WEF for the past five years. “I love it here,” Moylan continued. “The quality of competition makes you want to rise to a higher level every time you’re here.”

Hunter Kay of Charlotte, NC and Bastille, an entry of Eliza Fauntleroy, captured the reserve title. Kay piloted the coming seven-year-old gelding by Catoki’s Cannon to first, second, fourth, and fifth place finishes over fences, and a second place finish under saddle.