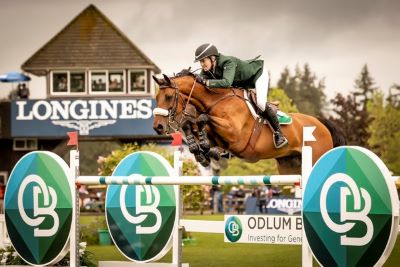 As the rain began to fall on course for the Longines FEI Jumping Nations Cup™ of Canada, the Irish felt right at home.

Langley, British Columbia’s Thunderbird Show Park hosted six teams for the final leg of the North and Central America and Caribbean division of the Nations Cup series, but none could put enough pressure on the four-man squad of Daniel Coyle (Legacy), Shane Sweetnam (James Kann Cruz), Andrew Bourns, and Conor Swail (Count Me In). Led by Chef d’Equipe Michael Blake, the group finished on just five faults. It was a closer race for the remaining podium placings, as Mexico rallied for second (13 faults) ahead of Australia (22).

Peter Holmes’ technical 1.60m track offered little breathing room, which led to rails falling throughout his winding course. As other teams struggled to crack the code to a clear round, Ireland quickly pulled ahead, finishing the first round with just four faults against them and two rails in hand. The group would only draw off in the second round, as Coyle improved upon a four-fault score to jump clear and Bourns produced one of just two double-clear efforts on the day aboard Seatop Blue. When Sweetnam added just a single time fault aboard his exciting 9-year-old James Kann Cruz, it clinched the win for the team. Team anchor and World No. 5 Swail did not even need to jump a second round with his partner from the Longines FEI Jumping World Cup™ Finals, Count Me In, despite Mexico adding just 1 fault to their total in Round 2.

“Obviously we have got good depth, and I’m so lucky to have such a good bunch of people,” Blake said. “It’s very easy to drive a good car, and we’ve got one here.”

Ireland has made the podium in every Nations Cup event at the venue since 2017, including a 2018 victory. Swail and Coyle were on that squad and bookended their teammates, who delivered with meaningful mounts. James Kann Cruz excelled in the Irish Sport Horse gelding’s Nations Cup debut, while Bourns recorded his first Longines FEI Jumping Nations Cup™ victory with a horse that his parents picked out as a foal.

“My father is here, so it’s a real family affair,” Bourns said. “I have to say, [Seatop Blue] is just as part of the family as I am.”