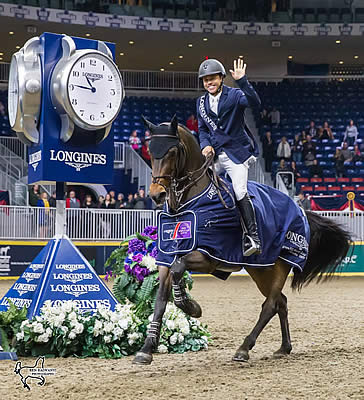 Toronto, Ontario – U.S. Olympian Kent Farrington will headline a star-studded field as the international show jumping division gets underway at the Royal Horse Show, held as part of the 96th Royal Agricultural Winter Fair running November 2 through 11 at Exhibition Place in downtown Toronto, ON.

Four days of international show jumping competition will culminate in the $205,000 Longines FEI Jumping World Cup™ Toronto, presented by GroupBy, on Saturday night, November 10. Having won last year’s featured event riding Voyeur, Farrington plans to saddle up Creedance as he attempts to defend his title against some of the best show jumping competitors in the world.

“I love the Royal Horse Show,” said Farrington, 37, of Wellington, FL. “It’s a throwback in time with everyone wearing black tie and a packed house. All of the classes feel important. It’s one of my favourite shows in a beautiful city.”

Of Creedance, an expressive 11-year-old chestnut Dutch Warmblood gelding owned by the rider and R.C.G. Farm, Farrington said, “I’ve had him since he was seven and he’s really stepped up to be a very competitive grand prix horse on the biggest level. He has won classes at The Royal and other five-star events and is very fast indoors. Now that he’s more mature, he’s gotten more predictable and easier to manage. He was quite difficult to manage when he was young but he’s getting better with age.”

Canada will also be represented by eight competitors to make up the total of 24 athletes who contest The Royal’s international division each year. Erynn Ballard of Tottenham, ON, Keean White of Rockwood, ON, and Ian and Jonathon Millar, both of Perth, ON, qualified based on their standings in the Longines World Rankings while Jump Canada’s high-performance committee named Ali Ramsay of Victoria, BC and Beth Underhill of Schomberg, ON as its two picks for the international division. Nicole Walker of Aurora, ON and Amy Millar of Perth, ON earned their tickets into the international division as the newly crowned Canadian Show Jumping Champion and Reserve Champion, respectively.

Saturday afternoon, November 10, is Family Day, presented by McDonald’s, at the Royal Horse Show. The entertaining K9-Equine Challenge, presented by the Toronto Star, pairs show jumping horses with agility dogs to see who can complete their respective courses in the fastest time. In an unparalleled evening of horse sport, the $205,000 Longines FEI Jumping World Cup™ Toronto, presented by GroupBy, will bring down the curtain on closing night of the Royal Horse Show.

In entertainment, Australia’s Guy McLean will demonstrate his unique form of natural horsemanship throughout the Royal Horse Show while Pogo Puissance by Xpogo will take jumping to new heights as young athletes attempt to set records by jumping obstacles on pogo sticks.