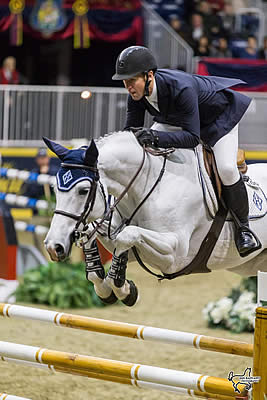 Toronto, Ontario – Olympic gold medalists and former No. 1 riders in the world rankings make up a star-studded field in the international show jumping division at the Royal Horse Show, held as part of the Royal Agricultural Winter Fair, from November 1 through 10, 2019, at Exhibition Place in downtown Toronto, ON.

This year, the two-time Olympic team gold medalist will defend his title aboard an up-and-coming mount, Noche de Ronda. With a longstanding history at The Royal that dates back more than 20 years, Ward marks it on his competition schedule each and every year.

“I’m not Canadian, but The Royal feels like a second home for me,” said Ward, who has won the Longines FEI Jumping World Cup™ Toronto an impressive nine times to date. “I love the city, the competition, and the sold-out crowd that we get to ride in front of every night. Seeing a horse show that embraces tradition and still has people attend in black tie is a special experience for me as a rider. I remember coming here with my dad and it continues to be a family affair for us. I am happy to be a part of it again this year.”

Following the formula of eight U.S. competitors and eight international competitors, Canada will also have eight show jumping representatives in the international division at this year’s Royal. Based on the current Longines world rankings, Erynn Ballard of Tottenham, ON; Mario Deslauriers (father of Lucy) of New York, NY; Eric Lamaze of Wellington, FL; Amy Millar of Perth, ON; Beth Underhill of Schomberg, ON; and Nicole Walker of Aurora, ON have all received invitations. They will be joined by the top two finishers from the $125,000 Henry Equestrian Canadian Show Jumping Championship, held November 2 and 3, who are not already qualified.

Saturday afternoon, November 9, is Family Day, presented by McDonald’s, at the Royal Horse Show. The entertaining K9-Equine Challenge, presented by the Toronto Star, pairs show jumping horses with agility dogs to see who can complete their respective courses in the fastest time. In an unparalleled evening of horse sport, the $210,000 Longines FEI Jumping World Cup™ Toronto will bring down the curtain on closing night of the Royal Horse Show.

To purchase tickets and for more information, visit royalfair.org/horse-show.