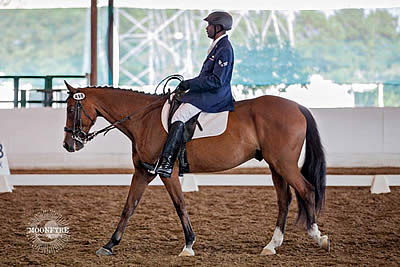 Wellington, Florida – March 12, 2014 – Since the 2012 London Paralympics closing ceremonies, the international para-equestrian dressage world has been buzzing.  The 2013 calendar year was a year of developing, a year of new horses, and a year of excitement for U.S. Para-Dressage. Armed with new chef d’equipe Kai Handt, the 2014 U.S. Para-Dressage riders are aiming for Normandy and not stopping until they hit that podium. The Adequan Global Dressage Festival (AGDF) CPEDI3*, held March 13-16, 2014, in Wellington, FL, will be a big show for not only the U.S. riders but for international riders from Canada and Mexico. Twenty-seven horse and rider combinations will enter The Stadium on Friday, March 14, for three days of competition. Friday includes the Team Test competition followed by Saturday, March 15, Individual Test, and finally on Sunday, March 16, the Freestyle competition. The FEI Para-Equestrian Dressage Ground Jury includes Kjell Myhre (NOR), Marc Urban (BEL), and Kristi Wysocki (USA). The AGDF CPEDI3* is the last of two international qualifiers held in the United States for the USEF Para-Equestrian Dressage Selection Trials for the 2014 Alltech FEI World Equestrian Games. The CPEDI3* FEI trot-up will occur on Thursday, March 13, at 5:00 pm followed by the Road to Normandy Kick-Off Party occurring 5:30 pm – 7:30 pm in the Global Pavilion at AGDF. Everyone is welcome to attend and support the U.S. Para-Dressage athletes. The Adequan Global Dressage Festival 10 CDI-W/CDI-1*/CDIY/CDIJ/CDI-U25/CDI-P/CPEDI 3* and National Show is sponsored by Today’s Equestrian & GF Enterprise LLC and Mike and Roz Collins.

Para-equestrians from the U.S., Canada, and Mexico will vie for multiple accolades at the AGDF CPEDI3*. Para-dressage athletes will compete over three days in Grade Ia, Ib, II, III, and IV. Grade Ia competition will feature U.S. rider Roxanne Trunnell who moved from Washington State to Wylie, Texas to prepare for the 2014 year. Trunnell will be showcasing two horses including her new horse NTEC Richelieu and her proven mount Nice Touch. Trunnell was last seen internationally riding at the Golden State Dressage Festival CPEDI3* in 2013 with Nice Touch. Also competing in Grade Ia in his first CPEDI3* is Wounded U.S. Air Force Veteran Derrick Perkins. Perkins will be aboard Oldenburg gelding NTEC Hans. Both Trunnell and Perkins will have great competition with Paralympian Jody Schloss of Canada and her own Inspector Rebus riding in Grade Ia. Also in Grade Ia is 2010 U.S. World Equestrian Games team athlete Laura Goldman riding her new horse Buckeye and Canadian Robyn Andrews aboard Fancianna.

In Grade Ib U.S. young rider Sydney Collier will be riding the German Sport Horse gelding Willi Wesley, owned by Victoria Dugan, and her second horse, Mecklenburg NTEC Cuplee, owned by Patricia Mendenhall. The 2014 World Equestrian Games is the first year that Collier is of age to represent the U.S. at an international event like the WEG or the Paralympics and she is looking forward to the opportunity. Former four star event rider Margaret McIntosh of the U.S. and her own Rio Rio will also compete in Grade Ib. From Canada, Paralympian Ashley Gowanlock will ride Off to Paris, owned by Equine Canada, in addition to Collegiate Sweet Leilani, owned by Kendalyne Overway.

Sharing the ride on Off to Paris is fellow Paralympian Lauren Barwick in Grade II. Barwick will also compete with Ferdonia 2 against Mexico Paralympian rider Erika Baitenmann. Baitenmann will be riding Leonora and Fite. Two-time Paralympian Rebecca Hart of the U.S. will be showcasing her new mount Schroeters Romani. Schroeters Romani was recently purchased from prestigious Straight Horse in Denmark in immediate conjunction with Hart’s family, Margaret Duprey, Cherry Knoll Farm, Sycamore Station Equine Division, Barbara Summer, The Ruffolos, and Will and Sandy Kimmel. Competing in their very first CPEDI3* in Grade II is Deborah Stanitski (USA) and Tiramisu.

The U.S. will be dominating Grade III with rider Eleanor Brimmer of Wayzata, MN and her brand new horse London Swing; Elle Woolley and her own P. Sparrow Socks; and Angelea Peavy with horses Ozzy Cooper and Lancelot Warrior, both owned by Rebecca Reno.

In Grade IV, Mary Jordan (USA) will be riding her consistent mount Sebastian. Jordan and Sebastian were the top horse/rider combination in the 2013 AGDF CPEDI3* and are looking to secure another top score before the week is over. Jordan will be accompanied by U.S. athletes Pamela Hardin and horse Freemont, owned by Nadege Soubassis; Elizabeth Traband and Ucari, owned by Helene Bergstrom; and Kate Shoemaker and her own Arpeggio. Competing for Canada in Grade IV is Lynne Poole riding Cruiser and Vasco E.

The Adequan Global Dressage Festival 10 CDI-W/CDI-1*/CDIY/CDIJ/CDI-U25/CDI-P/CPEDI 3* and National Show is sponsored by Today’s Equestrian & GF Enterprise LLC and Mike and Roz Collins. The CPEDI3* runs from March 13-16, 2014 in Wellington, Florida.