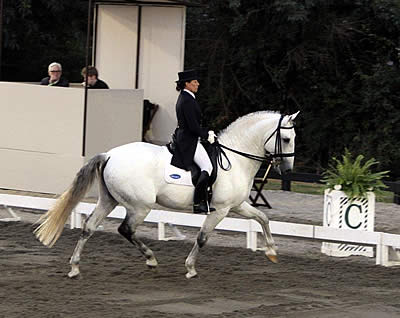 Itapira, Brazil (January 20, 2014) – When Interagro Lusitanos trainer Pia Aragao says 2013 was a ‘fairly good year’ for her, it is with the same mastery of understatement that she applies to her dressage.  And like any true horsewoman, she’ll also credit any of her achievements to her four-legged partners – Baldor Interagro, Cezanne Interagro, Vade Mecum Interagro and Zepelim Interagro – first.

To the charismatic grey, Zepelim, she owes the most: “To start, I was appointed, together with a dozen riders, to the Brazilian teams Long List in preparation for the Pan Am and Olympic Games. I won the State Championship with Zepelim and was second at the National Championship. We were the best combination to qualify for the Brazilian team for Odesur.” Odesur, or the South American Dressage Championships, are March 8-11, 2014 in Quilotta, Chile.

“Zepelim was named third in the yearly horse rankings with our national (CBH) federation. After Chile, he will return to Brazil and continue training for Grand Prix. Hopefully he can start in a local class by the end of the year and be Grand Prix competitive by 2015.”

Until then, she’s justly proud of the consistent scores her current Grand Prix horse, Vade Mecum Interagro, keeps turning in.  “He has placed in every Grand Prix start and always well over 60%.  Our best result was 65.90% in our Freestyle at the CDI3* Expo, where we placed second.”

She also praises her grey Third Level mount, Baldor Interagro, with “amazing” quality. In 2013, “He won all classes he started in with no less than 66% and was National Champion at Third Level. “The plan is to reach Prix St George ready to compete in the FEI World Challenge in October. He’s a horse I’d like to have ready for the road to the Pan Ams in 2015,” said Aragao.

Looking ready to graduate to Third Level with Aragao next is Cezanne Interagro: “We did a few classes in Sao Paulo and he won them all. He also won the Medium Level class at the FEI World Challenge,” said Aragao.  FEI World Challenges give riders who, under normal circumstances cannot take part in international competitions and live in more remote countries, the opportunity to compete internationally without having to leave their own country.

With such solid success across levels, it’s no wonder that others are eager to entrust their equine talent with her, too. One of the most thrilling transformations of the year has been watching Aragao take a 10-year-old Swedish Warmblood, Blåeld, owned by Sandra Lourenço, from First Level back in April 2013 to winning the Prix St Georges at the FEI world Challenge. “He was second in the Brazilian year-end rankings for Fourth Level,” she said.  “I’m looking forward to the future with all of my horses and the best plan is to be as well prepared as possible. So many things can happen. I will only take one step at a time.”

Founded in 1975 by Dr. Paulo Gavião Gonzaga to preserve the Lusitano breed, Interagro Lusitanos is the world’s largest breeder and exporter of Lusitano horses. Dr. Gonzaga started with a small band of four mares and one stallion imported to Brazil from the breed’s native Portugal, and since that first generation has produced more than 2,185 Lusitanos. Today, 450 horses populate Interagro’s 1200-acre, six-barn showplace ranch (which has appeared on the covers of 21 international magazines). In 2009, Interagro was recognized as ABPSL ‘Lusitano Breeder of the Year.’