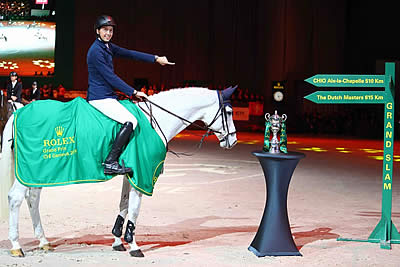 Switzerland’s Martin Fuchs becomes the new Rolex Grand Slam of Show Jumping live contender following his victory in the Rolex Grand Prix at CHI Geneva. The formidable duo of Fuchs and Clooney 51 once again showed the strength of their partnership, producing a speedy clear round in the jump-off (38.60 seconds) that proved impossible to catch. Great Britain’s Scott Brash was just 0.05 seconds behind his fellow Rolex Testimonee securing second place with Hello Senator and Belgium’s Jérôme Guery finished in third.

How does it feel to win your first Major?

Wow! This is a huge win for me; it is certainly a career highlight and tops off an unbelievable year for me. I am so happy.

What does CHI Geneva mean to you now?

It is one of best shows in the world and one that every rider wants to win. I am so happy that I was able to be so competitive at this Rolex Major and to win the Rolex Grand Prix in front of my home crowd is so special.

Clooney 51 is a superstar; how did he feel?

Clooney is a phenomenal horse and his performance was exceptional. Everyone saw what he did in the arena; he tries so hard and is just amazing.

The biggest U25 class at the CHI Geneva, the Grand Prix des Espoirs, was won by USA’s Coco Fath and her chestnut gelding, Exotik Sitte. The 19-year-old from Fairfield Connecticut produced an electric jump-off to seal the victory in the time of 34.89 seconds.

Fath commented on her win: “I am so honored and humbled to just be a part of this legendary event but to win here is a dream come true. I am lucky to have such an incredible team behind me at Amethyst Equestrian with Rodrigo, Alexa, and Fran (our groom) all here supporting me, as well as the equally incredible team at home cheering from afar! And of course, the inimitable Exotik Sitte a.k.a. Scotty who is the best partner I could ask for!”

It was an emotional Saturday evening at the CHI Geneva as the show jumping world bid goodbye to Scott Brash’s legendary horse, Hello Sanctos, in a special retirement service. Brash paid tribute to the horse that helped him become the only rider to have won the Rolex Grand Slam of Show Jumping: “He’s made all my dreams come true and I really can’t thank him enough for what he has done. I also need to thank my owners for believing in me and believing in Sanctos. We had an incredible partnership and I hope he will be remembered as a superstar.”