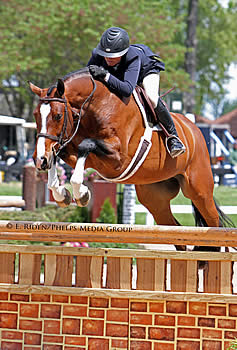 Lexington, KY – May 18, 2014 – After a few months away from the show ring, Dr. Betsee Parker’s Inclusive is back and not missing a beat. The gelding returned to competition this week at the Kentucky Spring Classic and won both of the Large Junior 16-17 Hunter over fences classes this morning, clinching the division championship with Colvin in the irons.

“This was his first show back, and he’s been great,” Colvin said. “He’s just had some relaxing time, and now we’re bringing him back before [the Devon Horse Show].”

The Kentucky Spring Classic at the Kentucky Horse Park serves as the ideal, competitive stopping point before Devon, and based on their performance this morning, which earned them scores of 89 and 90 over the Bobby Murphy designed courses, Colvin and Inclusive are more than ready for the Dixon Oval at Devon this coming week.

Colvin continued, “He never spooks or anything, so even though he hasn’t shown in a little bit, we weren’t really worried about that. He had a big stride, and he just felt great today.”

Way Cool came in to the day as the frontrunner in the division with two wins under his belt from yesterday’s over fences rounds in the Claiborne Ring, but Inclusive edged out his barn mate today in the Stonelea Ring for the championship title.

“He got a little spooky today,” Colvin said of Way Cool. “He liked the Claiborne yesterday, but today he was looking at the fences like they were a little much.”

While spookiness may have been evident in his first round, it was not at all evident as he cantered around the second course and turned in a score of 87 for the second place finish and additional points toward the reserve championship.

With the 2014 Kentucky Spring Classic championships to their name, Inclusive, Way Cool and Colvin are now making the drive to Scott Stewart and Ken Berkley’s River’s Edge Farm in New Jersey before heading to Devon later this week.

Also making the trip to the Devon Horse Show after an enjoyable and successful week at the Kentucky Spring Classic is fellow junior rider Emma Kurtz. While Colvin led the championship charge in the Junior 16-17 Hunters, Kurtz did the same in the Junior 15 & Under Hunters.

She kicked off the morning by sweeping the Small Junior 15 & Under Hunters with two different horses: Rose Hill Farm’s Enjoy and Oscany, Inc.’s Clooney. The morning’s first blue ribbon over fences and blue ribbon under saddle were both awarded to Enjoy, while Clooney earned the day’s second top call over fences. At the end of the day, the two horses sat tied for the championship title with 34 points apiece. With more points earned over fences, the championship was awarded to Clooney while Enjoy took the reserve spot.

Kurtz also swept all three of the morning’s Large Junior 15 & Under Hunter classes and took home the tricolor with Rendezvous Farm’s Prologue. The reserve championship in the division was awarded to Sophie Simpson and Rose Hill Farm’s Statement.

Today marked the end of the Kentucky Spring Classic, but hunter jumper competition at the Kentucky Horse Park continues this summer with the Kentucky Summer Horse Shows, kicking off on July 23.